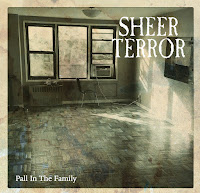 SHEER TERROR
Pall In The Family
Reaper Records/Rebellion Records
Place of origin: New York City, New York, USA
Genre: Punk/hardcore
Available in 7” and 12” vinyl format (Reaper Records)
Available in 12” vinyl and limited edition CD format (Rebellion Records)
Release date: August 13, 2018
Sheer Terror, arguably the kings of New York hardcore, return with a new EP following a successful reformation involving a new full length, a series of reunions (including a spot on the This Is Hardcore festival), a live DVD and documentary and a box set of rereleased albums. For a band that stayed beneath the radar they amassed quite a cult following. Sheer Terror was infamous for their seething, satirical criticism and hymns to personal heartache, with a Celtic-Frost-meets-Discharge sound owing to their founding members, guitarist Alan Blake and lead vocalist Paul Bearer. The band is also known for recording their 1989 album Just Can’t Hate Enough at CBGB, with Prong’s Tommy Victor engineering. Their 1994 EP Old, New, Borrowed And Blue was co-produced by Type O Negative’s Josh Silver and their ‘95 full length Love Songs For The Unloved was co-produced by Victor. Bearer was a unique frontman and voice in hardcore. Blunt, discourteous and prurient with a dose of humor, he has been described as a cross between Fear’s Lee Ving and Ralph Kramden from The Honeymooners. His personality showed most potently when Sheer Terror performed live. His one liners and jabs at the audience covered any topic he deigned to talk about, from NY punk to squatters’ rights (“I’ll give you a right, I’ll give you a left and I’ll give you a kick to the fuckin’ head”) Even Marky Ramone acknowledged his ability to work a crowd in the documentary that accompanied the DVD. It’s been a long time coming but Standing Up For Falling Down (released in 2014 by Reaper Records) was greeted with newfound popularity for the band, everyone involved was pleased with the new material and it seemed fitting to follow it with Pall In The Family. Released in August, Pall In The Family features a new lineup and Bearer’s distinct personality. Bringing fresh faces in revitalizes the band’s trenchant perspective and callous mindset. The four tracks composed for it sound not less but more embittered by experience, sounding like the logical progression from the classics I mentioned earlier. While listening to the EP I had to go back and listen to those albums again, then rewatch the documentary. After that, Pall In The Family took me back to 315 Bowery in the summer of ‘89 when the bands playing there were getting more attention than the bathrooms. Bristling with unrelenting umbrage, disenchantment and general animosity, Pall In The Family makes it clear that Sheer Terror is back. If this review made you want to see Sheer Terror live, their Facebook community page has show and tour information to look over. -Dave Wolff