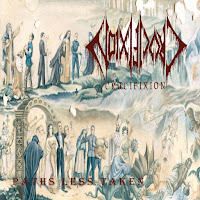 Band: CRUCIFIXION
Place of origin: Houston, Texas, USA
Genre: Death metal
Full length: Paths Less Taken/Raising The Dead (reissue)
Label: La Caverna Records (CD format; limited to 500 copies)
Release date: March 27, 2019
New school death metal was birthed in the U.S. but there is something about death metal from Central American and South American countries showing how seriously Central American and South American bands take the genre; its blast, its brutality and its darkened overtones. Like the U.S., U.K., Sweden and Poland, Latin death metal has a personality and passion all its own. Crucifixion makes the point as strongly as Brujeria did on such classics as Mantando Gueros. Hailing from Texas in the glorious Nineties, they were one of the first bands to feature an all-Latino lineup and to write and sing in their native language. Though Crucifixion didn’t receive anywhere near the recognition they deserved and disbanded in 1998, La Caverna Records is re-introducing them to today’s generation of brutal music fans, rereleasing their final full length Paths Less Taken alongside their 1996 promotional demo Raising The Dead. The original release of Paths Less Taken came out on the band's own label, Death Fiend Records, and as far as I know it was the label’s only release, so there likely wasn’t enough pull to spread word. Plus there have been at least ten bands going under the name, so it may have been easy to confuse them. I looked them up on Encyclopedia Metallum and didn’t find any information regarding the band members. It really is a shame since there was an incredible amount of potential on their part to gain a Stateside following. I listened to this re-release a few times and the songs are growing on me exponentially. It has everything death metal fans would love to hear. From the vocals to the guitars to the drums to the atmosphere to the production to the relentless fury that pushes this genre. There are lyrics in Spanish and English, which in those days would have led them to being heard by wider audiences. Check this out on Bandcamp or order a copy and you’ll probably wonder why they weren’t as popular as they should have been. -Dave Wolff