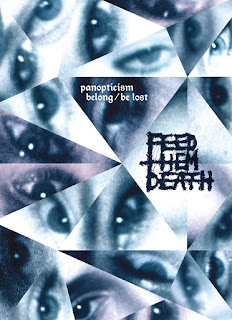 Band: Feed Them Death
Location: London
Country: England
Genre: Nihilistic avant-grind noise
Full Length: Panopticism: Belong/Be Lost
Label: I, Voidhanger Records
Format: A5 digipack CD (includes digital download and Bandcamp streaming)
Release date: April 17, 2020
Over the last few days, FEED THEM DEATH got in contact with me. Apparently, there was new tuneage to digest. I have listened to this project before and enjoyed the music very much, so I happily obliged the offer for review. When I finally got around to listening to the full release, I sat at my desk, clicked play, and was instantly consumed but soundwaves of a dark and menacing variety.
When it comes to things being ''similar'' to FEED THEM DEATH's previous release, the heavy guitar work, tight drums, and demonic-sounding vocalizations that permeate this soundscape can be likened to FEED THEM DEATH's earlier material... but there is a slight atmospheric change and noise/ambiance that I cannot remember being a part of the previous offering.
There is a heavy focus on extreme metal, but the experimental side of FEED THEM DEATH's sophomore release is without question what stands out the most to me. This band in my humble opinion has surpassed the hordes of standard death and black metal and has formed its own unique sound, classification, and imagery.
Something else that is worth mentioning about this is that this is a solo project of ''Void.'' Without knowing any better I would have made the assumption that this was a complete band, furthering my notice of FEED THEM DEATH's extreme potential.
Although I don't know much on the topic, this album (as previously written in the bio provided by the band) is ''A concept album inspired by “Discipline and Punish” and “Madness and Civilization” by philosopher and social theorist Michel Foucault.'' Again, I am not up on these writings, but I figured this was worth mentioning.
Overall, I am glad that Void got in contact with me again. It is good to see FEED THEM DEATH's progress, breaking the mold of the mundane and the ordinary, quickly attaining the status of ''unique'' and ''memorable.''
Great stuff, Void. Keep the tunes coming!
Note: I didn't get to listen to ''Anti-Modernist Extradition.'' I don't know if it was a fault of the stream or my internet/computer, but I will play this with my next listen. –Devin Joseph Meaney