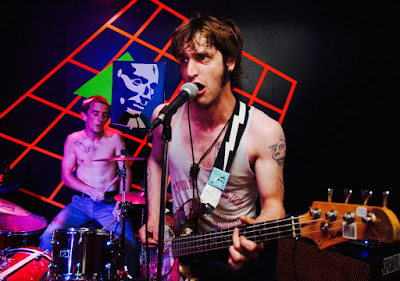 Hey Mr. Rudderham! Please take a moment to introduce yourself and your band Trash Brain.
Howdy! James W. Rudderham here, but you may call me Jim, Jimmy, or Jimbo. I play bass and sing in Trash Brain. Trash Brain is myself, Ally Parsons on guitar and vocals, Dale “Diesel” Fahey on lead guitar, and Tanner “T-Baby” Leudy on drums and vocals... we all do a little singing!

How long has the band been active... and what are the goals Trash brain hopes to achieve in the coming future?
We have been active since early 2018 with a total of two hiatuses (the current one being pretty self-explanatory)... before we all got stuck inside we managed to record an album, so in the coming months we will be working to finance and release it on cassette! We just released our debut single “The BLOB” on Bandcamp with a bonus B-side. Every download helps! Other than releasing music we can’t wait to get back to playing gigs and dancing.

How many shows have you guys played? Locally or away?
Trash Brain have played many local shows in the Sydney area over the past two years. Some notable venues are (were) The Upstairs, Governors Pub, The Black Diamond, and the Undercurrent Youth Centre... We even played at the notorious Capri at last year’s Gobblefest! We played a total of one away show in Moncton NB for the No Funswick festival. The gig was at a place called Pink Flamingos that primarily operates as a drag bar. It was awesome and we got to see lots of killer bands. Plus there was pinball and the movie Gummo was projected on the wall while we played.

Aside from Trash Brain... what other bands and projects are you involved with?
I sing for a heavier band called Cap Gun in Sydney. Check out “World of Pain” on Bandcamp! I’m also in the middle of figuring out how I can make a one-man movie... so we’ll see what comes of that.

What are some of your favorite bands?
I’m a big fan of New York bands from the 70s like KISS, Ramones, New York Dolls, the Heartbreakers... I consider the original Alice Cooper band from Detroit to be one of the finest bands of all time. I’m a big fan of Judas Priest, Girlschool, Thin Lizzy, Macabre, Prince, Dayglo Abortions, Acid Witch, Midnight, Roy Orbison, Misfits... I’m not really somebody who hyper focuses on one genre, I more so go for a band at a time. I find a band or artist I like and I listen to them until I find or revisit something else... more often than not there is electric guitar involved. Lately, I’ve been listening to a lot of X (Los Angeles) and Helloween.

And what other activities give you the inspiration to write music?
I guess admiring other artists would be a big one, we all have influences. As the primary lyricist in most of the bands I’ve been involved in I find inspiration in many things to write about ranging from VHS tapes to tragedies to Chinese food to aliens to my personal well being. There’s always something you can describe to a melody, no matter how serious or silly.

What are some goals you have with music and other creative projects for the near future? (Aside from releasing a tape and a one-man movie)?
More gigs off the island would be great. I would love to start jamming the large catalog of songs planned for the next TB album... we also made mention of doing a show to raise funds for our album where we would perform a set of originals followed by a set of covers. Hopefully, things get well and we can see that happen soon.

If you could force two celebrities to birth a baby, and then train him/her to be an artist of some kind, who would those two celebrities be, and why?
Ahh, I would choose for the Ramones to have had babies that were trained to mimic their every move so I could see them live...

Any final comments for our readers? (You can drop links and promos here).
Please check out the new jams on “The BLOB” single from Trash Brain @ trashbrain.bandcamp.com and follow our social media to keep updated on our foolishness. Thanks Devin.

Thanks James aka Jimbo aka Jim aka Jimmy! It was nice chatting with you!