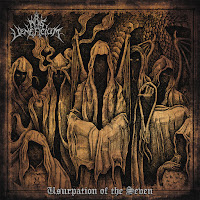 Band: Ars Veneficium
Location: Limburg
Country: Belgium
Genre: Black metal
Full Length: Usurpation of the Seven
Label: Immortal Frost Productions
Format: Digital, jewel case CD, digipak CD, colored and pictured vinyl
Release date: February 28, 2020
In the six years since they released their debut EP “The Abyss,” Ars Veneficium has approached a plateau of professionalism comparable to such well known bands as 1349, Enthroned, Satyricon and Darkthrone. Their latest full length “Usurpation of the Seven” states they will keep reaching for higher achievements. Choosing Wolfthrone Studios in Finland to mix and master their 2016 full length “The Reign of the Infernal King” was clearly an important step for them, as the equipment at the studio’s disposal was needed to scour and sandpaper their rawness into something sufficiently clean, atmospheric and extreme to convince black metal fans of their potential. Returning to this studio has further polished their new material and significantly bestowed it with more bite and tightness than you would have expected from a band’s third official release. “Usurpation of the Seven” unequivocally sounds like it could have been released on Necropolis, Osmose or even Century Media, not only for its production but the band’s improvements in songwriting and performing. Immortal Frost Productions is obviously making an insightful decision by sticking with Ars Veneficium through the long haul, if this album is an indication of where the band is heading. From the intro “Hymns of Chaos” to “Wrath of Life” to “The Flames of Endless Yearning” the band represents forbidden occult practices and plot rebellion against all light and sanctity with accomplished songcraft and spot-on musicianship combining a crisp, clean sound, clear vocal tracks, old and new black metal influences, intricate guitar progressions, primality and sophistication. Most of all it presents the majesty of evil with poise, vigor and the earnest finesse of bands with many more years of experience finding themselves in the studio and seeing what the fans want to hear on the road. If you needed still more proof that black metal progresses to maturity on its own terms, take an objective, unbiased look at this album and discover something unique and distinctive. –Dave Wolff

Track list:
1. Hymns Of Chaos
2. Wrath Of Life
3. Devour The Light
4. In Sin, Bred By Madness
5. De Luiaard Heerst
6. In The Fires Of Eternity
7. 7
8. Under The Wings Of Beautiful Darkness
9. The Flame Of Endless Yearning