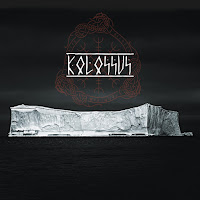 Band: Kolossus
Location: Genoa
Country: Italy
Genre: Black metal
Full Length: The Line Of The Border
Label: Satanath Records (Russia), The Ritual Productions (Netherlands).
Format: Compact disc, digital album
Release date: March 19, 2020
Helliminator of Kolossus has been a solo musician since he recorded three demos for an industrial black metal project he did from 1994 to 2004 or ’05 called T132. I looked up this project and couldn’t find any information about those demos, so I don’t know if they’re even available anymore. Maybe they were released on a limited basis because of financial constraints and/or because he wanted to keep a certain amount of secrecy, but I’d check them out sometime if I had the chance. It was a long stretch between T132 and his newest project; in 2018 he and fellow Italian multi-instrumentalist Albrecht Schwarzimmer of Manon released a split CD, and last month saw the release of his debut album “The Line of the Border.” Being from Italy Helliminator could have easily taken inspiration from sources as diverse as Cultus Sanguine, Necrodeath, Opera IX, and Bulldozer. Instead, he looked to the beginning of the Norwegian black metal revival to brainstorm ideas; bands like Emperor, Enslaved, Borknagar, and Helheim. Listening to an Italian re-interpretation of Norse black metal, with many hints of the Italian approach to the genre, he seems to rediscover the seditious stoutheartedness of the former while managing to secure the influence of his home country so they harmonize together. This is especially so in the themes of religious conflict between ancient paganism and Catholicism that are part of the narrative of “The Line of the Border.” The Bandcamp link that was passed to me by Satanath Records doesn’t include lyrics, but the song titles suggest religious conflict is a substantial part of the concept here. This is gorgeously, seductively rendered as the album takes you from somber, sepulchral passages to tumultuous compositions with solid, frenetic drumming, anamorphic bass, somnolent guitars, eerie whispers, mellifluous vocals, and anguished fry screams. All this adds to an album with a feeling of immenseness, of expansiveness and magnificence that expresses an ages-old conflict in a convincing way. The effect is subtle but quite profound, making “The Line of the Border” well worth the effort of seeking out. –Dave Wolff