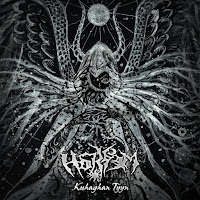 Project: Haissem
Location: Donetsk, Donetsk Oblast
Country: Ukraine
Genre: Melodic black metal
Full Length: Kuhaghan Tyyn
Label: Satanath Records
Format: CD, digital
Release date: March 22, 2020
The Ukrainian musician Andrey Tollock should have noted labels like Nuclear Blast, Season of Mist, Candelight, Osmose and Metal Blade knocking his door down to have Haissem on their roster. When you hear his new effort “Kuhaghan Tyyn” you’ll realize this is not a statement made lightly. Since 2016 he has created profound, eclectic black metal comparing with many prolific, accomplished bands, having released four full-lengths and two EPs with Haissem and one full length with his project Sunset Forsaken. Haissem’s latest “Kuhaghan Tyyn” is nothing short of epic storytelling, tales of heroic legends comparable to the classical legends of King Arthur and Beowulf. “Black Tide Dominion” takes you on an odyssey in which you’ll visit exotic, faraway lands and meet heroes and villains you hadn’t thought could be devised by human minds. Russia, Ukraine, Belarus, Hungary and Romania have legends and folklore of their own, dating back many centuries. Coming from that part of the world Tollock would naturally spawn trailblazing albums reflecting the tales of his ancestors. “Kuhaghan Tyyn” is not only epic but timeless and unbounded by nationality, and can enrapture you whether you’re into black metal, melodic death metal, symphonic metal or traditional heavy metal from any country. Some of the bands I was reminded of were Moonspell, Amon Amarth, Enslaved, Deceased, Ancient, Dissection, Borknagar and Ihsahn. The songs comprising the legend of “Kuhaghan Tyyn” are as narrative musically as they are lyrically. Featuring just enough rawness and atmosphere, they have crafty, finespun traces skillfully added, as if stories within stories are buried deep within the legends he is creating. I’m stunned by Tollock’s drive to try new things and how well he’s able to experiment with new methods of broadcasting his influences through his songwriting. There’s musicianship you haven’t heard much from other bands, no matter how intently you have to search for it. Even more impressive were the arrangements of fry scream and melodic vocals, especially the female vocals suddenly appearing in “Кuhаҕан Тыын.” This is a project you’ll want to listen to countless times and whose past releases you’ll likewise want to seek out. –Dave Wolff