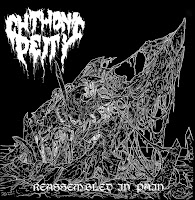 Band: CHTHONIC DEITY
Location: Denver, Colorado
Country: USA
Genre: Death metal
Demo: Reassembled in Pain
Label: Carbonized Records
Format: 7” vinyl, cassette, streaming
Release date: October 31, 2019
As stated on their Bandcamp page, "Reassembled In Pain" the debut demo from Chthonic Deity contains four songs of energetic and heavy death metal/punk from members of Scolex, Ascended Dead, and Blood Incantation. I did not know what to expect when I was sent the link for this album, but I can say after listening that it was a nice little blast of chugging carnage.
The vocals on this release are put together very well. The same could be said for the guitars and the drums! In fact, everything about this is top tier! Personally, for me, the bass is the best part of these tracks. With a tone that reminds me of the local band (from Cape Breton, Nova Scotia) Infernal Region, it adds a certain low-tuned finesse that brings the whole thing together with malicious ferociousness.
I sat back for a few moments and tried to decide a favorite track on this beast, but honestly, I enjoy all of them equally. Not too long, not too short, the length of this is perfect, and offers just enough brutality to entice my ears and elicit a second playthrough.
A co-release with Woodsmoke, this album is limited to 500 7" Copies, with a poster and download card included. 300 cassette copies were also pressed by Lunar Tomb Records. Needless to say, this is a limited release, and you should run to get a fucking copy!
In closing, this album is a vicious blast of truly malignant, heavy, audio assault. Great music... a great band... and a great experience! -Devin Joseph Meaney