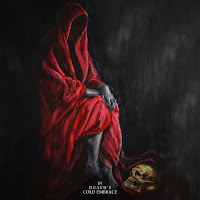 Band: Ars Veneficium
Location: Limburg
Country: Belgium
Genre: Black metal
Band: Ulvdalir
Location: St. Petersburg
Country: Russia
Genre: Black metal
Split: In Death's Cold Embrace
Label: Immortal Frost Productions
Format: Vinyl, digital, streaming
Release date: June 21, 2019
A few days ago I was sent "In Death's Cold Embrace", featuring the bands Ars Veneficium and Ulvdalir. I am just getting around to viewing this split now, and goddamn, what an awesome release! Featuring only two tracks, this is a short one, but it still manages to snag my attention fully.
Hailing from Belgium, Ars Veneficium pummels through the first track with a vicious blackness. Tight drums and intense guitar work are brought together with vocals that can only be described as hell-bent and merciless. I needed to let this track play through a few times, but by the third play through I can say that this song is put together very well and Ars Veneficium is more than deserving of an audience.
Calling Russia their home, Ulvdalir is just as dark and foreboding as Ars Veneficium, and the musicianship speaks for itself. Both bands without question play with a tightness that makes itself known, proving that black metal can be created anywhere in the world and still eviscerate the ears of those who are brave enough to listen.
As I have mentioned in other reviews, I usually prefer listening to shorter releases, as it gives me a chance to listen to all the tracks more than once. This way, I have a firm idea of the music in my mind, and I can review the content easier. With this split in particular, I was actually hoping for more! Overall, this was a quick (yet highly enjoyable) release, and I would for sure listen to more tracks from these bands when they become available. Great stuff, Ars Veneficium and Ulvdalir! -Devin Joseph Meaney