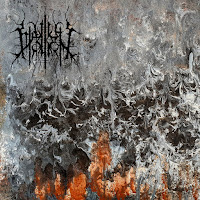 Band: Mazikeen
Location: Melbourne, Victoria
Country: Australia
Genre: Symphonic death/black metal
Full Length: The Solace of Death
Label: Satanath Records
Format: CD, digital (Bandcamp, Youtube)
Release date: March 23, 2020
When discussing Mazikeen’s new album and those involved in writing and recording it, I have to start with drummer Marco Pitruzzella who really pushes the band and raises the bar for extreme metal in general. He’s in his mid-thirties and has played with about thirty bands. He has seriously pursued it since learning jazz and rock at nine and discovering metal at thirteen. He was also married and divorced with three kids who he spends his free time with. I have no idea how he summons the energy to keep it up, but with Mazikeen he proves himself one of metal’s most impressive drummers since Flo Mournier (Cryptopsy, Vltimas, Tribe of Pazuzu).
Pitruzzella’s fills, double bass, breakdowns and especially his blast, are monstrous, mercilessly quick and precise, almost nonhuman in their delivery. They have to be to equal the facility and concentration of the rest of the band (listed below) as they perform on this album. I should also note this is their first full length since releasing several singles and one EP since 2017. And yet again, this is a recording that shows a band as long-serving, accomplished professionals who have been together for much longer. If you think the likes of Dark Funeral and Marduk have reached the limits of underground metal, you really need to give “The Solace of Death” a listen. I’m sure there must be other drummers out there with similar aptitude, but Mazikeen astonished me with this album.
Songs like “Apostate,” “Vexation Through the Golden Sun,” “Fractricide” and “Psychotic Reign” are utterly staggering in their fierceness. But as I said, this is in no way a noise band who don’t take songwriting seriously. Mazikeen give new meaning to the term quality music which they demonstrate in equal quantities. From guitar solos relating to classical metal, cold and atmospheric piano and keyboards calling back to the second wave of black metal, fry screaming with the sensation of being flayed alive with kamas, machetes and war scythes, a balance between black and death metal and folkish guitar sections, the band advertise plentiful adaptability on this album.
Fans of Mayhem, Dakthrone, Dissection and Dimmu Borgir get the added bonus of covers of those bands at the album’s Bandcamp page at Satanath Records. –Dave Wolff