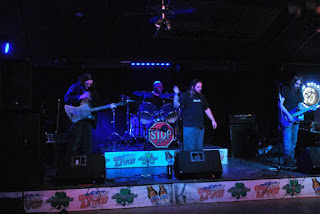 Interview with Austin Hurd of STOP SIGN RIOT
Some time ago Stop Sign Riot did an interview for Obscure Chaos zine, which can be read at its online blog. How did you become acquainted with publisher Kat Chaos and what led to the interview?
We met her through online promotion as we are always trying to get our name out there. In fact, we haven't played a show in almost a year but we still get fans on all of our social media pages every week, which blows my mind. She ended up putting together an interview on Facebook. Due to scheduling the only person from the band that was able to do it was our former drummer who left late last year.