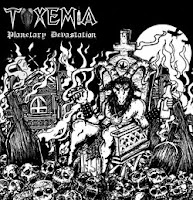 TOXEMIA
Planetary Devastation
The 3rd Inferno
The3rdinferno@blogspot.com
When I reviewed this Philippine band’s album Ancient Demon for Obscure Chaos zine I likened it to 70s horror pulp like The Devil’s Rain. This one (released in 2013) is more straightforward death/black metal with the raw early 90s feel I’ve come to know and love. I should mention its label The 3rd Inferno is run by Roy Sierra of Underworld Zine & Compilation, who published Trendcrusher Zine in the 2000s. I interviewed him a second time to catch up after years of not being in contact; the article is on the interview page. As for this recording, the production boasts the recorded-live-in-the-basement sound which grounds the material into that cult niche unique for the Filipino death metal scene. There’s that sense of mystery somewhat likened to bands from South America but not exactly the same. Did I mention bands from the Philippines are dedicated to extreme music? Ask Toxemia and Paganfire. In the States there is the occasional debate as to whether bands are “open-minded”. Toxemia reject these labels, not needing to try “branching out.” They simply play what they feel and let it speak for itself. If that’s not enough, go listen to another band and fuck off. At the very least this attitude is honest, which is better than putting on airs to secretly feed one’s own ego. No ‘look how open-minded I am” bullshit here, just pure unapologetic integrity, especially “Grave Desecrator,” “Evil Drunkard,” “Goat’s Blood” and “Toxemia Attack.” It’s a welcome relief if there hasn’t been enough brutal music gracing your stereo. -Dave Wolff