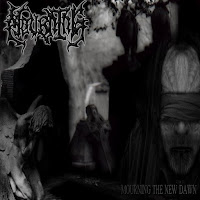 MOURNING
Mourning The New Dawn
Ossuary Industries
http://www.facebook.com/MourningNJ
I just reviewed an older EP from this band (Blinded By Hate) for Obscure Chaos zine; Bill Pope mailed me two CDs in trade for print copies of AEA. The material on Blinded By Hate was recorded late in 2004 when extreme metal operated under a far different set of rules than it does today. In 2004 we had websites to keep up with bands, zines and labels but social media was still relatively new to the game and Internet downloading was not nearly the topic of discussion it has become now. Also, extreme metal was just starting to be mass promoted in magazines and music television, and metal culture hadn’t begun to experience the sort of dumbing down of the latter 00s. Bands and fanzine editors in the 80s and 90s were known to be intelligent and well-spoken in interviews. Bill and Ted/Beavis and Butthead were known as parodies and not the perceived behavioral template of metal fans. Zines like The Grimoire and Endemoniada went a long way to breaking the airheaded rocker stereotype displaying relevance and knowledge. Mourning has retained more than enough from that time in their overall attitude, and this CD shows as much, Where Blinded By Hate was a black-death metal crossover, The New Dawn leans closer to brutal death metal. I thought the former recording had better drum production but the general feel on this release is darker and more malevolent in the DM way so to speak. There’s more double bass here and in songs like Mourning The New Dawn and Human Extinction the relentless speed and time changes flow together more smoothly. I should also mention the King/Hanneman-esque guitar solos in The Grave I Dug For You, a bit of a Slayer tribute to conclude the EP with. Hearing that I felt transported to the days of Reign In Blood; the song itself resonates of Slayer influence without sounding like a direct copy of the band, which is something that unfortunately happened a little too much in the 80s. -Dave Wolff

TRACK LISTING:
1. Mourning the New Dawn
2. Eve of Annihilation
3. Dark Autumn
4. Red Rivers of Babylon
5. Human Extinction
6. The Grave I Dug for You