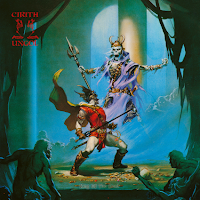 CIRITH UNGOL
King of the Dead (Ultimate Edition)
Metal Blade Records
A milestone in underground metal released in 1984 on the Enigma Records label, Cirith Ungol’s King Of The Dead is getting the Metal Blade reissue treatment with additional tracks and a bonus DVD of the band’s 1983 debut performance at the Roxy in West Hollywood. As I missed the initial release I’m obliged to extend thanks to Metal Blade for an opportunity to hear it. The bonus tracks and DVD are included in digipack with expanded packaging. The vinyl format includes 400g spine sleeves, a booklet and poster. The album is being reissued to coincide with the band’s appearance at this year's Keep It True festival in Lauda-Konigshofen, Germany and is the first of the planned series Metal Blade Originals. Patrick W. Engel was in charge of remastering the songs and polished them while keeping their impact firmly in mind. Having formed eight years before the release of their freshman album Frost And Fire, Cirith Ungol is considered one of the first power metal bands inspired by the sword-and-sorcery writings of J.R.R. Tolkien, Robert E. Howard and Michael Moorcock. Founding members Greg Lindstrom and Robert Garven met in an English Literature class and were so taken with Lord Of The Rings that the impressions Tolkien had on them carried over into their songwriting as much as their hard rock influences from the early 70s. One noteworthy fact: the beginning of Cirith Ungol happened while occult rock bands like Coven, Black Widow, Ancient Wisdom and Blood Ceremony comprised underground scenes of their own. With the exception of Coven, many of those bands faded into obscurity though a few have recently made comebacks. By luck or determination Cirith Ungol managed to last through the 70s and 80s while having a hand in inspiring new generations of musicians to this day (including Ghost who you can read about here). The bridging of the gap between occult rock and power metal is evident in Cirith Ungol’s material, most expressly in the longer songs with extended guitar solos such as Master Of The Pit and Finger Of Scorn and the Black Sabbath-esque piece Cirith Ungol. The live versions of those two songs from the 2016 Frost & Fire Fest in Ventura, California show how much age and experience has matured the band, and the recording of Death Of The Sun for the first Metal Massacre compilation is another historical gem for those who had not the chance to hear it the first time. I can’t comment on the DVD since the stream I was sent from Metal Blade doesn’t include the footage, but you’ll get to watch it when the reissue comes out on April 28. -Dave Wolff