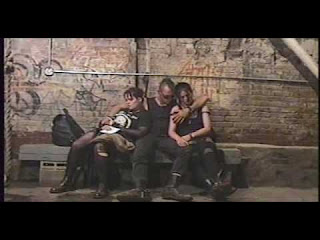 NEW YORK CITY SUBCULTURE 1996
Filmed & Edited by Chloé Le Roux (The Visual Artist formally known as Nia Janeen Brown)
New York City Subculture 1996 is an unofficial documentary released on social media back in 2006. It’s a gritty depiction of the punk lifestyle in pre-Quality of Life East Village filmed video style, presumably with no additional film crew and no scripting. Granted it’s an amateur undertaking a decade old showing an even older side to punk. Regardless I felt now was appropriate to air my thoughts since NYC subculture has been grossly misrepresented by movies like CBGB (2013) and more recently Enchantments (2015), and Joe Corré’s 2016 publicity stunt in which he torched five million pounds’ worth of rare memorabilia. Almost as if the closedowns and forced evictions of the clubs wasn’t enough. Without appropriate information you wouldn’t know it’s far from dead, as you would if you ignored the hype and traveled to Manhattan for yourself. As one New Yorker said, the lifestyle and movement never died but rather went back underground. The best way to see how things were is to watch documentaries; and what strikes me about New York City Subculture 1996 is its unsensationalized presentation. People who play in bands, attend shows, work at local tattoo parlors and live on the street are introduced by first names and interviewed on a one-to-one basis, more in conversation form than question and answer sessions. It’s similar to street life documentaries HBO aired in the 80s and 90s like Life Of Crime, without the gratuitous drug use and criminal mischief. Perhaps Another State Of Mind is closer to the mark as nobody is speaking for the kids but the kids themselves. As one of them put it, it’s a “suburban view” of New York punk. Local scene members (including Pat and Kaya of Deviant Behavior and Scott of Skitzopolis) expose city life, not arguing pro or con but giving interviewees reign to say what they feel and letting the viewer decide how to relate to them. In fact no message is set in stone since each interviewee has a different experience to speak of, but a common theme is finding one’s own way without turning to society. Even if homeless and possessing almost nothing by first impressions, they choose their lifestyle with a clear conception of their individuality. Appreciable is the doc’s honesty and the respect shown for them as having something to say. You might be shocked, but you’ll come away with more of an understanding of what punk really is. -Dave Wolff