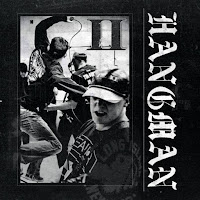 HANGMAN
Hangman II
Independent
The second EP release from Hangman (Long Island, New York, USA) makes little secret of frustration and disillusionment felt by people still trying to make sense of a world in which honesty continues to fade into the woodwork and more people pretend at politeness and courtesy. If the search has been going on for a long time and yielded nothing there is bound to be frustration. It’s a natural impulse. Fortunately hardcore is still a medium where you can express it if you’re in a band and the people who see you understand what you mean to one degree or another. As for those who still don’t, Misfits road crew member John Grimm said it best in Living The American Nightmare: The Story Of A Rockstar, “The horror is out there; the norm need to … have that little twinge of fear of ‘hey, this could come knocking on my door’.” The scene in Long Island has made a comeback of sorts with clubs booking bands from the immediate area and neighboring locales, so you know they’re at least gathering down the block so to speak. People with pent up desire to remain themselves and change what they see happening in the world for the better is met with increased pressure to conform and accept what they see. I gather this from the lyrics written for Heat: “This world, it's getting worse by the day/Honest people have gone away… So, sit around like no problems exist/While all I can do it fucking clench my fist/Nothing that I can do.” The song goes on to ask if this is really adolescent, directionless angst or maturing with a genuine desire to change the world. At the same time questioning those who pay lip service to it when their true desire is personal gain. This is summed up in the lyrics of Conviction: “I don't need the moral guise, you hide behind/I Don't wanna live in your perfect world… Save your breath and preach to someone else.” If you’re struggling with unwelcome pressure to be like everyone else, Hangman can give you a lyrical shove against the opposition, and a musical shove on top of that as the musicianship reflects the drive and determination of the lyrics they’re backing. Somewhat like All Out War meets crust punk with more than enough energy to sweep you up in all its abrasive, aggressive glory. -Dave Wolff