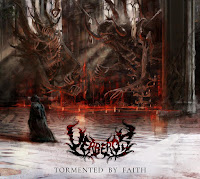 UERBEROS
Tormented By Faith
Independent
This Polish death metal band formed in 2015 is for the most hardcore of purists into old Vader, Morbid Angel, Immolation and Vital Remains. Fast, furious, uncompromising, unapologetic and brutal with talent, innovation and mastery of their craft. Their debut album Tormented By Faith has been greeted with fervid plaudits following its release this year. The inhuman turbulence actualized here is a clear sign that extreme music continues to forge ahead leveling all in its path. After a brief introduction calling attention to The Omen, or perhaps the TV series in which a fully matured Damien must come to terms with being the devil’s offspring, Uerberos waste no time propagating the qualities that made the bands cited above legendary names. Uerberos rely heavily on blast (courtesy of drummer Kamil Ścibik who previously played in Aesthesis and Imperial Sin) and lead vocalist Bartłomiej Kaniewski (also of the Polish D/M band Inset) perfects the time tested method of drawing from deep in his innards to deliver a guttural roar. This style is needed to match the insane rapidity, tight musicianship and low tones assailing you with merciless abandon. There is such energy enmeshed with the technical facility that listening to each track is like listening to the first; putting it in other words, this album is near incapable of becoming wearisome. You simply don’t have a chance to get bored since so much is happening in addition to the endless blast. Guitarist Bartek Kaczorowski (another member of Inset) knows how to manage his songwriting and has an ability to give the songs the feel of a chaotic whirlwind while Darek "Kaczor" Kaczorowski (Inset, ex-Exhaust Death) keeps up with the band on bass. The production is clean as it showcases the abilities of the band members; while not taking away from the heaviness it makes them sound like seasoned musicians who have worked in bands for years. Tormented By Faith is available as a Bandcamp stream with lyrics (see above), a limited edition digipack and a limited edition digipack/patch package (see their Bigcartel link). You can likewise visit them on Youtube. -Dave Wolff