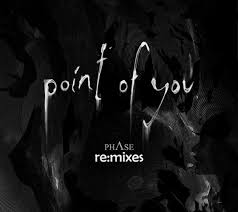 PHASE
Point Of You re:mixes
Independent
Country of origin: UK
Genre: Post punk, alternative, psychedelic
Release date: September 7, 2017
This is the first release from Phase since their full length The Wait came out in 2014. The reasons for their hiatus is a mystery to me at this point, since they were receiving favorable press around the time In Consequence was made available to the public. The band has always had a unique sound and were unafraid to take chances with their direction. You’ll be able to tell this easily if you check out their back catalogue from 2010 to the present. You should know beforehand this band is an extremely acquired taste and their material is not for everyone. Though it has been a while since I listened to them I remember they didn’t sound quite like anyone else, and they were one of the first bands to incorporate psychedelic themes in their songs. Before Phase started, founding member Thanos Grigoriou played bass for the Greek black metal band Black Winter. Black Winter disbanded in 2008 and reformed in 2015 with a new lineup. If you’re interested you can check them out at https://winterhordes.bandcamp.com. Back to Phase: as you can see below four remixes of what is presumably a new single from the band were recorded for this release. Each of them offers a radically different perspective of the song, with their own sound, atmosphere and host of effects. If anyone reading this is familiar with Phase, this EP travels deeper into left field than anything they recorded in the early 10s. Fans of electronic and industrial who believe they’ve heard everything are in for a surprise or two should they take time to venture into the territory explored here. The second and third remixes have engaging drum programming to go with their respective themes. Imagine Alice In Chains and Nine Inch Nails on acid and you have something of an idea what to expect. The final remix has a computerized feel somewhat likened to early 80s video games. It also made me think of movies from that time period such as Tron. My personal favorite is the first remix which consists mostly of piano and keyboards, with hypnotic scales and minimal programming. While this depends on personal taste, this EP has a lot to offer a wide variety of listeners. -Dave Wolff