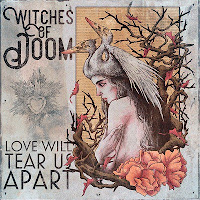 WITCHES OF DOOM
Love Will Tear Us Apart (online single)
Sliptrick Records
Country of origin: Italy
Genre: Goth/stoner doom metal
Release date: February 9, 2018
Witches Of Doom is a goth/doom/stoner rock band from Rome, Italy, who started in 2013 and released their debut single Needless Needle a year later. Since then they released two full lengths (Obey in 2014 and Deadlights in 2016) and recorded a cover of U2’s New Years’ Day with Paul Bento of Type O Negative and Carnivore as a tribute to the late Peter Steele. At the time of this writing the band are working on a new full length; in preparation for its release they have posted a new online single which they recorded at Hombre Lobo Studios in Rome last November. If you like post punk/new wave like Joy Division with unexpected twists, such as atmospheric keyboards, electronic effects and haunting vocals, you’ll want to hear this cover of Joy Division’s Love Will Tear Us Apart. Granted the band’s crossover between goth and doom rock is not for everyone, especially the volume of the guitars and the despondent air surrounding the musicianship. Still, the volume and despondency serves to enhance the emotions implied by the original version of the song. The process of fusing together three subgenres of rock, reinterpreting and rearranging the song and adding their own touch is clearly the result of a gathering of open minds pooling their resources. Unafraid to think outside the box, they create something fresh and inventive, testing how far bands can explore uncharted musical territory if they dare to try. The impressions of Sisters Of Mercy, Marilyn Manson, Soundgarden and The Doors brings the 1980 Joy Division classic to the present. If you listen closely enough you may hear some of those impressions, or maybe even impressions of other bands I hadn’t picked up on. Love Will Tear Us Apart is available for streaming at Spotify, iTunes and Sliptrick Records’ official Youtube channel (where you can also hear their U2 cover), and can be downloaded at iTunes. -Dave Wolff