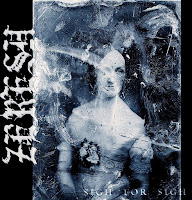 Project: ZERESH
Country: Israel
Genre: Atmospheric depressive dark folk
EP: Sigh For Sigh
Label: 999 Cuts
Format: Digital, streaming
Release date: January 18, 2018
If Orphaned Land represents one end of the Israeli metal spectrum, bright, optimistic and reaching for higher spiritual planes, Zeresh represents the other. “Sigh For Sigh” speaks of darkness, seclusion, loss and tragedy, in some ways likened to Norwegian black metal and the poetic lyricism of Cradle Of Filth. To begin to understand it, the solo project of Tamar Singer (Cruel Wonders, Autumn Tears, Necromishka) is based on Hebrew folklore, specifically the Book of Esther in the Hebrew Bible (also the Tanakh). According to legend, Zeresh was the wife of Haman who plotted to kill Mordecai, a civil servant of the Persian Empire. Zeresh warned Haman his plot would lead to his downfall. While Zeresh’s fate after Haman’s execution is unclear, some reinterpretations of the legend suggest she became a beggar. Besides the cultural legend reference, the lyrics are borrowed from the writings of William Ernst Henley and Alexander Blok. Henley was an influential poet, editor and critic in late Victorian England. Blok was a poet, writer, publicist, playwright, translator and literary critic in the late nineteenth and early twentieth centuries. Their poems complete a profound, intensely personal EP. This shows in compositions which are both mournful and cathartic, reflecting no external brightness, only dismal gloom from deep inside the soul. There is a confined, oppressive air running throughout “Sigh For Sigh”, mostly from keyboard and electronic sounds that create moods that are enclosive to the point of driving you to madness. At the same time, the material is no indication of self-indulgent sorrow, rather a desire for relief from anguish years or centuries old, to achieve tranquility again. The idea is to face the darkness within rather than flee from it. The acoustic guitars and vocal techniques; the series of notes from one passage to another, one line from another; while desolate, evoke a beacon of illumination within the darkness. The most vehemently intense song here is “Holy,” a dissonant, ungentle mix of discordant guitars and lamenting vocals. It’s an unexpected turn after the previous songs that takes you to another dimension. “Double Ballad Of Life And Death” opens with more dissonant guitars that fade into the background when the lone acoustic guitars and isolated vocals return. If you thought ambient projects like Abruptum were intense you have to check out this EP. -Dave Wolff