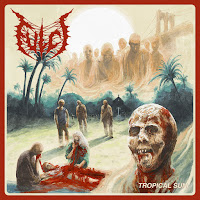 Band: FULCI
Country: Italy
Genre: Death metal
Full Length: Tropical Sun
Label: Time To Kill Records (Italy)
Format: CD, streaming
For fans of: Cannibal Corpse, Incantation, early Nile, Devourment, Mortician and Fabio Frizzi.
Release date: May 31, 2019
Fulci is an Italian death metal band who have been smashing the metal scene since 2013 with their heavy sense of extreme often old school style death metal.
In 2015, this brutal bunch gave us Opening The Hell Gates, their first full-length album, which was full of heavy vocals, persistent blast beats, old school death metal guitar patterns, with thrashing style highlights, making their first album release a fantastic debut.
2019 sees Fulci come thumping back across the pit toward us, with an amplified sound within their 2019 release Tropical Sun.
Please do not let the apparent nice album name fool you, because this album is full of aggression, violence and deathly themes around horror, gore, and the undead. Unlike their first album, Tropical Sun while maintaining their heaviness, takes a much slower and rhythmic death metal approach with obvious components of slam shining through, particularly in tracks such as Church Of The Undead.
We are given 14 tracks and while that sounds substantial, these tracks range from 59 seconds with the longest being 3.48 minutes. Tropical Sun was designed to be listened to in one sitting from start to finish, which is achievable, most excellent and as the band intended it, I'm sure.
An obscure and seemingly out of place intro showcases ominous synth and a voice over which feels as if it was sampled from a 1930's horror movie, candidly talking about the dead. However, the brutality commences with the title track Tropical Sun as it propels deep into a death metal surge of vicious proportions. This track is an onslaught of crushing heavy riffs, thick smouldering bass and a magnitude of deadly low gutturals.
Tropical Sun is an unrelenting and punishing album. A true neck breaker which deep dives into opaque dense territory with a doomed and dark ambiance, while offering intense and rhythmic drum tracks over blast beats.
Many moments throughout Tropical Sun have weight to the groove flow, which is impossible not to enjoy and this said flow shines in ‘Splatter Fatality'. What a pulsing and cadenced track this is with vocals that smash you fiercely like a sledgehammer.
It is hard not appreciate Tropical Sun for its sheer heavy breakdowns, slam and death style execution and hardcore groove. Vocalist Fiore is a powerhouse and one who is merciless in delivering his lows and scolds of mid-range gutturals.
Evidently, Fulci has kept old school essential components to this new album with a slight introduction to slam and groove styles. Tropical Sun is a foreboding and demanding album showing off the bands maturity and capability to subtly mix genres and progress within their sound and as a band. -Kelly Tee