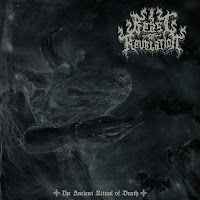 Band: Beast Of Revelation
Country: Netherlands
Genre: Death/doom metal
Full Length: The Ancient Ritual of Death
Format: Vinyl, CD
Label: Iron Bonehead Productions (Germany)
Release date: March 6, 2020
The wild beast with ten horns and seven heads has been released from the underworld. He brings, under his left-wing, the debut “The Ancient Ritual of Death” that includes nine apocalyptic revelations of pure Doom Death Metal, made with the experience and riot that only three war veterans awarded with the Medal of Honor to noise and blasphemy could own. In the anti-vocal cords, we find John McEntee of the legendary INCANTATION. In percussive and bombastic artillery, the former ASPHYX Bob Bachus preside and last but not least, in the electrocuted guitar, bass and backing vocals, there is A.J. van Drenth, former guitarist of the BEYOND BELIEF, that great old Dutch Doom Death Metal cult band. The album was mostly recorded in Holland and was mixed and mastered by J.B. van der Wal (ABORTED, INQUISITOR). It also includes some solos by Eric Daniels ex-ASPHYX and Robbie Woning of DEAD HEAD. There is not much more to add, just invite you to listen to this new American / Dutch cult to Death / Doom, direct simple music, made with mastery and bravery. Keep looking forward to The Ancient Ritual of Death out next March 6th, via Iron Bonehead Records on CD / LP respectively. Check the cover of Manuel Tinnemans / Comaworx to get a visual and sound idea of the aforementioned beast of revelation, whose number is still six hundred sixty-six, call now or stick to the consequences. -Jorge A. Trejos

Track list:
1. Legions
2. The Great Tribulation
3. The Cryptic Void
4. The Fallen Ones
5. Beast VI
6. The Days of Vengeance
7. The Ancient Ritual of Death
8. The Unholy Roman Empire
9. We, the Lords of Chaos