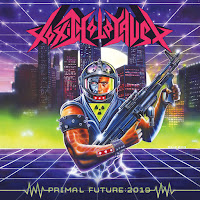 Band: Toxic Holocaust
Location: Portland, Oregon
Country: USA
Genre: Speed/thrash/black metal
Full Length: Primal Future: 2019
Format: Vinyl, Digital, CD
Label: eOne
Release date: October 4, 2019
Toxic Holocaust is a classic thrash/speed metal project from Portland, Oregon founded in 1999. “Primal Future: 2019” is their sixth full-length release through eOne.
“Chemical Warlords” is a thrashing, punk track featuring the distinct gravelly vocals Toxic Holocaust is known for. A hard rock element is seen is the blistering riffs and “balls to the wall” attitude which instantly commands your attention. Hard-hitting, musically tight and lyrically leaning towards a strong dystopian aspect- Toxic Holocaust has successfully bridged the gap between all their prior releases while still remaining true to their distinctive sound. Another lyrical theme that is consistent throughout this release is a focus on the evil of man and this dystopian feel reflects in Toxic Holocaust’s aggressive and unrelenting attitude towards “Primal Future: 2019.” Speed metal elements are also reflected throughout this release in Toxic Holocaust’s musically unrelenting attitude which adds a more aggressive and brutal tone. “Primal Future”, the namesake track of this release, starts with a more eerie approach focusing more on the heavy metal aspect of Toxic Holocaust and is a welcome and refreshing change after so many brutal and technically soundtracks. I will admit to personally enjoying every track on this release- Toxic Holocaust’s brutal and diverse musical approach has not changed or diminished within the many years they have been active as a band and “Primal Future: 2019” is no exception. I genuinely look forward to seeing what Toxic Holocaust will continue to release in the future and the musical direction in which they continue as a project. -Sarah McKellar