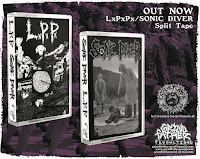 Band: Sonic Diver
Country: Netherlands, Scotland, Japan
Genre: Grindcore
Band: Little Puppy Princess
Location: Seoul
Country: South Korea
Genre: Grindcore
EP: Sonic Diver/Little Puppy Princess split tape
Format: Cassette, streaming
Label: Extreme Terror Production (Netherlands)/Grind Father Production (UK)
Release date: August 8, 2018
While scrolling Facebook, I saw a link to some grind tunes. Anyone who knows me understands that this is common for me, but as always, I clicked on it to see where the internet would take me.
Within seconds I was transported to a Youtube video for the split between Sonic Diver and Little Puppy Princess. I did not get a chance to review it right away, but the day after, I sat down to give this musical abomination (in a good way) some words and another listen.
The first band that attacked my eardrums was Sonic Diver. The guitar work and vocals on this side of the split are pretty standard (although well done), but the drums and percussion stand out quite a bit. It sounds to me to be a machine but layered alongside weird synth sound effects. It took me a few listens to get used to this, but I quickly realized this adds to the genuine uniqueness that Sonic Diver seems to have.
Little Puppy Princess is just as put together as Sonic Diver, just without the strange synth stuff that was presented previously on this release. Still, L.P.P. absolutely shreds and I would encourage anyone and everyone to give this awesome band a listen. Both bands on this split are great, but for me personally, Sonic Diver takes it for originality.
A great split and a good listen. Give it a spin, homies! -Devin Joseph Meaney