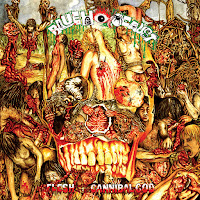 Band: Blue Holocaust
Country: France
Genre: Goregrind
Full Length: Flesh for the Cannibal God
Format: 12” vinyl (limited to 300 copies), digital album
Label: Septic Aroma Of Reeking Stench, A Symphony Of Death Rattles Records, Headsplit Records
Release date: June 21, 2018
Recently, I got around to listening to/reviewing the latest release from Vomi Noir. Shortly after, I was talking to Pierre de Palmas (Braindead Webzine, Vomi Noir, Blue Holocaust) and he informed me that there was a new Blue Holocaust album to listen to!
I have been a fan of Blue Holocaust since “Twitch of the Death Nerve” (2004), so I jumped at the chance to give Pierre's new offerings a view.
The first thing I noticed about “Flesh for the Cannibal God” was that the sound and production of Blue Holocaust has really been improved upon since 2004. The vibes presented are the same overall, but one can for sure tell that time and effort went into the making of this grisly new-ish release.
As always, the vocals are disgusting (in a good way). Ranging from splattery gargles and gurgles to “clean” rancid vocalizations, fans of goregrind should without question revel in the sickness that Pierre has put forth. When it comes to the instruments, everything is played well, is on time, and skill was for sure a factor in the writing and musical orchestration of Flesh for the Cannibal God.
Unlike Twitch of the Death Nerve, Blue Holocaust is not a one-man band on this release and the drums are organic as opposed to a machine. Personally, I love drum machines when they are programmed well, but I guess that having a real drummer really helps when it comes to playing live. And anyone that has used a machine in the past knows that programming drums can be a pain in the ass, so cheers to Pierre for making the move to full band status.
Fun fact! After talking to Pierre via Facebook messenger, I found out that the lineup for this album and the recent Vomi Noir album is the same! Although there are strong similarities between these two releases, both stand out on their own and have their own distinct sound and feel.
In closing, I still love Blue Holocaust just as much as I did in 2004 when Twitch of the Death Nerve was released, and overall, the project has made great leaps and bounds when it comes to production and clarity. This is a great album and I encourage all gore-fiends across the globe to give this a listen... if you are brave enough, of course! -Devin Joseph Meaney