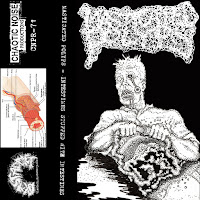 Band: Masticated Polyps
Location: Ohio, Virginia
Country: USA
Genre: Goregrind, gorenoise
EP: Intestines Stuffed with Intestines
Format: Cassette, streaming
Label: Chaotic Noise Productions (Richmond, Virginia, USA)
Release date: February 18, 2020
I was not really feeling like straight up goregrind or grindcore today. I listened to some old-school sounding punk rock, but that was not what I was vibeing with either. I wanted something less structured. A quick blast of audio madness that blurs the lines between music and noise. Overall, I realized I wanted gorenoise or something similar!
After some searching, I came to “Intestines Stuffed with Intestines” by Masticated Polyps. This is tagged as a fusion of goregrind and gorenoise, but it was posted by the Gore Grinder account on Youtube so I figured I would start my journey here. I have recently found out that this particular account is a genuine gold mine for all things deliciously heavy and noisy.
As posted in the bio provided, Masticated Polyps is a “noisy, two-piece, bass & drums noisy goregrind band with Jason from Suppression and Isaac from Sulfuric Cautery.” This is apparently their first release. Let’s see what this sounds like!
First off, this is a really violent sounding release. You can really feel the aggression pulsing through your speakers when you have this playing. This release in total is under five minutes, which is short even for this kind of stuff. But it for sure gets its point across.
The vocals are distorted to the point of no return and the drums are reminiscent of Last Days of Humanity. Again, the manic aggression that would need to be involved with the creation of these vocals is something that needs mentioning.
The guitar work (it is just a bass) is tuned so low that it is hard to decipher most of the notes. Still, overall, it manages to bring everything together nicely.
Again, this is a short release. I don't know how I would feel about listening to an hour long full length of this kind of stuff, but a short burst like this was very much needed today. –Devin Joseph Meaney