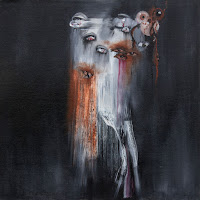 Band: Insect Ark
Location: Brooklyn, New York
Country: USA
Genre: Industrial experimental cinematic doom metal
Full length: The Vanishing
Format: Digipack CD, digital, vinyl LP
Label: Profound Lore Records
Release date: February 28, 2020
Cover artwork by Sonia Merah
Manhattan-based bassist, composer and multi-instrumentalist Dana Schechter was inspired to record Insect Ark’s latest full-length album from a daydream she has had many times in her life. Her daydreams were of drifting off to sea or walking down a lonely road, alone, never to be seen by human eyes. After years her inner visions fueled the concept of “The Vanishing”, which represents what she calls the impermanence of life: “It's about… trying to retain the perspective of how small we really are, invisible in the bigger frame of time and history. We all will face this impermanence, even if we try to hide from it… sometimes we forget we’re not immortal."
Since 2011 Schechter has explored this concept with Insect Ark, creating larger and larger soundscapes to remind us we’re ultimately a drop of water in the boundless ocean of eternity, regardless of how much we deny it to ourselves. You might be familiar with her work with bands like Swans, American Music Club, Angels Of Light, Gnaw, Zeal & Ardor, Wrekmeister Harmonies, Årabrot or her projects Bee And Flower and Gifthorse. With Insect Ark she seeks to leave an indelible mark on our individual and collective consciousness, adding her own chapters to a book musicians have rewritten countless times, searching for that one landmark.
Having parted company with drummer/electronics builder Ashley Spungin, who was in the band from 2015 to 2019 for their releases “Portal / Well” and “Marrow Hymns”, Schechter contacted Andy Patterson of SubRosa, DONE and The Otolith through a mutual friend. Once he proved to have the same dedication and work ethic as she, the new lineup recorded “The Vanishing” with NYC engineer Colin Marston. The addition of fresh talent into this project proved beneficial to its growth as “The Vanishing” is a diverse, monumental album that casual listeners on Bandcamp describe as being “haunting and disturbingly beautiful”.
“The Vanishing” reveals the godforsaken divinity of timelessness in a way that black, prog and experimental metal bands strive to do. Schechter and Patterson draw from an ethereal plane where time and space seemingly have no meaning, where everything stands still and goes on forever. You’ve heard of the many re-releases of the Fritz Lang classic Metropolis with a contemporary soundtrack, one of which included music by pop producer Giorgio Moroder. “The Vanishing” sounds appropriate for a re-release of Kubrick’s 2001: A Space Odyssey, especially where David Bowman confronts the monolith and sails into the unknown.
Denuded and majestic, full of emotions ranging from hope to pain to anger to joy, “The Vanishing” diffuses the ever-thinning curtain between reality as we perceive it and this unnamed dimension, finally bringing to light the true nature of the universe. Schechter and Patterson compose epic, multilayered instrumental passages that are the audial equivalent of van Gogh, Picasso and Goya in one package. Mixing gritty production, song structure like stoner rock, psychedelia, ambient and electronic effects, out of tempos and themes of deep space travel, “The Vanishing” is an ambitious album reaching farther than Insect Ark’s previous efforts and has something for listeners of Saint Vitus, Queens of the Stone Age and Pink Floyd in equal parts. –Dave Wolff