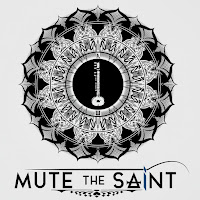 Band: Mute The Saint
Country: India
Genre: Indian classical/progressive metal
Full Length: Mute The Saint
Format: Digital album
Label: Independent
Release date: December 5, 2016
While searching Youtube for Beatles songs covered by metal bands I began to wonder how many metal bands incorporated sitar (taking into consideration the Beatles’ experimentation with sitar in the late 60s). I was sure that someone must have thought of it by now. Another Youtube search led me to a video by Mute The Saint on Metal Injection, which in turn led me to look for the band on Bandcamp. Their video and self-titled album came out back in 2016 but today is the first I’m hearing of them. Yes, Mute The Saint is comprised of musicians contributing to metal communities in their native India while making a statement that metal is a global language, according to their perception of traditional music from their home country and its hand in hand coexistence with loud guitars. Their conception of classical Indian music and progressive metal is so eccentrically dissentient that I was compelled to say something about it. Mute The Saint makes this association in such a groundbreaking manner, writing and arranging so constructively it’s like a mindset that’s altogether different from most genres of metal. While exploring this cultural crossover they travel into prog rock and jazz territory without much additional effort. Adding modern metal hooks, a heavy, grinding guitar/bass sound, progressions to contend with seasoned prog-metal bands, clever intercommunication between instruments, and securely rooted drumming that drives the off beats and time changes, this album is one of the unsung greats of the last decade. There are no lyrics or vocals in these five tracks, which is somewhat of a disappointment as I would have liked to see how the band interpret their material through vocals. Aside from that, these guys are ahead of their time and deserve to be recognized as among the first to blend metal with sitar. If their formula should catch on it wouldn't surprise me if imitators began crawling out of the woodwork to capitalize on the sudden surge in popularity. –Dave Wolff
Lineup:
Rishabh Seen: Sitar
Josh Seguin: Guitars
Shashwat Kapoor: Bass
Jared Sandhy: Drums
Track list:
1. Welcome The Change
2. Sound Of Scars
3. Calypso
4. The Fall Of Sirius
5. In Silence We Will Remain
Posted by Dave Wolff at 9:54 AM