EP Review: Mustard Gas and Roses "We Are One" (Pax Aeternum) by Dave Wolff 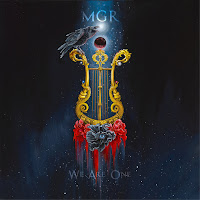 Band: Mustard Gas and Roses
Location: Los Angeles, California
Country: USA
Genre: Ambient rock
EP: We Are One
Format: Digital album
Label: Pax Aeternum
Release date: November 10, 2020
Like many bands and solo projects I’ve covered, Mustard Gas and Roses have a number of releases from years past, records with limited exposure and exclusive listenerships, records promising to expand traditional rock’s limits into something as untested as their capabilities allow. Again I arrived late to the party and missed the four full lengths Michael Gallagher released since he started this project, “Becoming” (2016), “22nd of May” (2014), “Wavering on the Cresting Heft” (2007) and “Nova Lux” (2006). Gallagher founded MGR to move beyond the bounds of his previous band Isis, writing ethereal, atmospheric music as a counterpoint to Isis’ sorrowful dropped B-tuned requiems. Gallagher has a tendency to vanish for years at a stretch between albums, only to return with reinvigorated distinctiveness after finding new musicians with varied backgrounds to work with. The new EP “We Are One” features covers of Joy Division and Spiritualized with two new originals. “Shadows” and “Becoming” struck me with the enigmatic mystery of the Doors and Lou Reed, with the ambiance of Sisters of Mercy and Glenn Danzig’s Samhain (the Swans are mentioned as being an influence). If you’re an avid listener of those bands, jazz, stoner rock and early new wave, you should easily find yourself immersed in “We Are One”. Gallagher writes quiet, self-contained music that unexpectedly fulminates into a bulldozing, entrancing wall of sound. Listening to “We Are One” is like traveling through space in a one-man craft, surrounded by emptiness and starlight that will never be reached in your lifetime. Collected from several recording sessions with different session musicians in 2017, the EP was mixed by Sanford Parker and mastered by James Plotkin. These two manage to unify each recording session into something catchy for its coldness and isolation. As for the covers of Joy Division’s “Exercise One” and Spiritualized’s “Cop Shoot Cop”, I’m not familiar with the original versions but these fit nicely alongside the two original pieces. The full length release of “Becoming” was recently reissued on Pax Aeternum records to coincide with the release of “We Are One”, so be sure to check it out next to the EP. –Dave Wolff
Lineup: