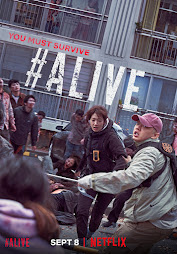 #Alive
Written by Il Cho and Matt Naylor
Directed by Il Cho
Starring Ah-In Yoo, Park Shin-Hye and Bae-soo Jeon
Distributed by Lotte Entertainment and Netflix
Release date: June 24, 2020 (South Korea), September 8, 2020 (world)
During my break from writing, I happened to watch a handful of movies. One of these movies was the film #Alive, a Korean take on the zombie flick phenomenon. I watched this one partially with my mother (she bowed out early because she did not want to watch a dubbed movie) but I did finish it by myself. And I am glad that I did! This film was pretty damn good overall!
It is similar to other zombie survival movies (No contact, limited food and water, high risks, etcetcetc.) but there are some things that stood out as unique in this film.
One thing I found was that #Alive was not as dark as many ''horror'' films, and there were a ton of hidden positive messages. Not to let on too much, but if you watch the film, pay attention to the scenes with the laser pointer. If you catch them, you will see a glimpse of faith and hope. But that is only if you are really paying attention.
As I watched this during the wrath of Covid-19, you can also notice certain similarities with modern life and this fictional film. And just like modern life, the film portrays that with a good mindset and a dedicated attitude... sometimes a genuinely positive outcome is what is in store. Or hey, maybe I'm just crazy.
This film may not be for everyone, but I personally enjoyed it. The visuals were pretty good and the dubbing (in my opinion) did not at all take away from the film. Long story short... give this one a view. And if you don't like it, the worst thing that can happen is that you shut off the TV. Amirite? –Devin Joseph Meaney
This review can be read at Devin Joseph Meaney's official blog. -DW
Posted by Dave Wolff at 9:17 AM