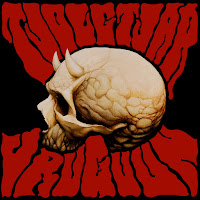 Band: Tjolgtjar
Location: Kenney, Illinois
Country: USA
Genre: Black metal, Black n’ roll
Full Length: Vruguun
Format: Digital album
Label: Independent
Release date: April 30, 2017
First off, I like to say from personal experience that Rev Preston's music gave me a voice when I first burst onto the scene with my own raw black metal project, Strings Of Distorted Doom.
I can sit here, and name countless influences. Friends of mine I made music with from their own bands or projects. Bands that are well known in the black metal scene and beyond. But Tjolgtar was the first Raw black metal band, I read about through online research of such bands from the states when I was deciding what to do musically with my limited experience doing music by myself while getting ideas listening to the late somewhat great, Seth Putnam band, Impaled Northern Moonforest, for fun. Prestons music was on the top of the list and eventually, I got contact with him personally after he heard my music amongst other bands I am associated with within the underground. His musical output is massive and his discography is a lot to go over. If anyone wants to get into TJOLGTJAR before playing anything by him, this is the first one they should get.
His album VRUGUUN is not his latest album, it is from 2016 but the only album I own so far by him in my collection of albums I own from many types of artists I have collected. He is a reserved guy that carries that Illinoisan Thunder. I can kind of put Rev in the same category in personality as my musical friend Dan Klyne of Appalachian Winter. Expect they are both their own type of out in the woods mad man from different states!
Rev here has great songs on this beautifully crafted album of his that is a two-disc collection. The first disc with 13 songs and the other with 12. All the art inside and on the back is personally drawn by Rev himself. It has very creepy and primal tones to it. Absolute madness. Does it remind me of what some album's artwork on the inside looked like in the 90s? Cover art is done by Athanor Arts and co-produced by Matt Comerford.
The vibes you get from this album are not exactly 90s. They come across as over-the-top classic hard rock n roll musically & vocally but still have the powerful presence of BM throughout. The guitar manship here is well crafted and composed. Hypnotic, and draws the listener in with the cult magic touch that is spoken of in it.
Then you get a whole other feel from it, that hard country feel, that, MOUNTAIN feel. Remember the guy from the band Mountain? He was a SCARY looking dude and was sort of an Andre The Giant type from looking at his physique. I have a Mountain record, I opened up the gatefold and that dude looked like a bear that was a frontier. Climbing!!!
That is what I get when I hear that 70s sounding vocal presence on most of his songs. It has a flavor to it only listeners of Mountain, Hank III, and even 80s metal music only has. It relates to a lot of different music genres on many levels. All wrapped up into a cosmic gift that is VRUGUUN.
The consistent theme throughout the album is simply one thing, SATAN.
I understand the topic is a touchy-feely one for most, but what the Rev pulls off here is a tribute to the man himself. Many bands in the past that have gained notoriety have also gone into this territory, The Rolling Stones, with Their Satanic Majesties Request...and even with Kiss - Hotter Than Hell. In his own personal way, he puts the nails in the coffin here. His own master of reality.
Also, his songs are covering other topics from other things that have to do with outer space, women, science, personal demons, rebellion, and much more. Just the whole trip that is humanity in itself through one's life.
If I had to choose one song from each disc that is my personal favorite, disc 1 would be Hearing The Voice Of The Devil, and on disc 2, Oh, Jupiter.
This is a long-overdue review too since I do not do my own zine anymore but better late than never. JR Preston captures all the things I am looking for when it comes to music that I grew up to, grew to enjoy, and also enjoy playing myself. An interview between him and I was made not too long ago which also will be linked here. Preach Rev!
Side note, I wish I knew what he is saying in the tray art with words like EMMEEDEEAA ISJTJAT JMANNJEEAJ but if I had to put it in my own words... it is the chant of his own black ritual under the party moon.
Get your hands on this great escape, while you still can...because Tjolgtjar is a tuxedo & black metal is a pair of brown shoes.
This one is for you, J.R. –Danny M. Ryan
Lineup:
The Rev. J.R. Preston: Vocals, all instruments
Disc 1
1. A Great Escape
2. Call of Holnijimnjok
3. The Dancing Satan
4. Then She Let Me See
5. Inside the Holwling Moon of Vruguun
6. A National Astronaut
7. Mars as a Fixture in Planetary Science
8. The Internal Arts of Ballal
9. Hearing the Voice of the Devil
10. Through the Pororium
11. Rjelmjinn Telminosz
12. Satan, Woman of Desire
13. I Am the Black Ritual
Disc 2
1. Lair of Skuul
2. Your Daughter
3. Until the Monsters Take You
4. Lustful Spirit
5. Oh Jupiter
6. Our Father
7. The Earth Immortal
8. 7 Lonely Demons
9. Flight of Ikarik
10. She's a Cannon
11. A Forgotten Oath
12. Party Moon
Posted by Dave Wolff at 3:00 PM