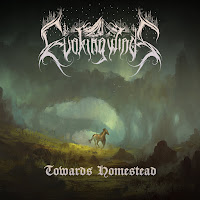 Band: Evoking Winds
Location: Minsk
Country: Belarus
Genre: Atmospheric folk metal
Full Length: Towards Homestead
Format: Digital album
Label: Independent
Release date: August 10, 2008 (Reissued August 10, 2021)
I swear this can’t just be me, when listening to a certain album you just get these magical ‘goosebumps’ all through your body that make you shiver in excitement for what you're experiencing sonically, it’s the most amazing feeling when it comes and reporting to you all today I’m excited to announce I can add another album to that list.
Evoking Winds - Towards Homestead
So this is actually an older album (released in 2008) but re-issued this month. It contains 10 tracks and running just under the half an hour mark with 28 minutes and 16 seconds run time.
There is so much to enjoy from this album that it’s almost criminal to choose just one aspect, let’s start with the vocal performances.
Although there are many tracks on this album that feature just instrumentals when there is singing it’s done in some amazing classic Norwegian Black Metal mixed with a pinch of modern-day Death it’s quite the amazing mixture of tons and octave shifts.
I love the intensity in the spoken words, the brutality in the range. It reminds me of a storm approaching on a clear sunny day, ready to wreak havoc on all that is near, truly powerful performances.
On the production side of things, we have some of the strongest examples of Medieval Folk done right. If anyone is familiar with my work they know I’m a massive fanboy of Folk music, the traditional type and so whenever I hear an artist or a band utilize the sounds of a more ‘refined’ era it makes me smile cheek to cheek for I know I’m listening to not only great music but carefully thought out and planned in the details and the production.
If I had to give some sort of reference for the music side of things, imagine a combination of the band ‘Panopticon’ combined with Folk artist ‘Richard Dawson’ and that’s the vibe I’m getting.
True, authentic Medieval Folk at its finest and when you add on top of all that the listening experience with some good quality isolated headphones it makes for a more grand experience! One of those albums that makes you think of fairytales, magic and what lies beyond our own life.
I love the way this album made me feel whilst listening, I know that’s not the most important thing in the world but it does leave that lasting impression. The instrumentation was done perfectly and with the most technical prowess one could have, the vocals were the perfect contrast to the harmonic dream state that was the production and it all fit together nicely.
I would want everyone to give this album a chance at least once, I feel it could change your day too! –Corban Skipwith
Track list:
1. By the River She Cried
2. Oh Black Raven, Leave Me Be
3. In the Woods, On Yellow Sand
4. Yurja
5. Rye by Mountainside
6. There by the Adamant Sea
7. Why You, River
8. In Our Yard
9. Arrow's Burial
10. Grateful Night
Posted by Dave Wolff at 9:42 PM