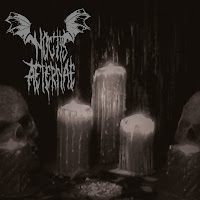 Band: Noctis Aeternae
Country: Germany
Genre: Black metal
EP: Noctis Aeternae
Format: Digital, CD, MCD
Label: Sol Records
Release date: February 15, 2022
How many of you thought I just flipped out and wrote the same thing twice? Well I don’t blame you if you did but today we have the EP which happens to be the same name as the band! The track list is as follows:
-The Legacy Of The Untold
-Nocturnal View Over Frozen Landscapes
-Sleeping Under Tartarus
As you can already guess from the title names this album is rooted in mythology, darkness and mystery. Honestly when listening to this album you can hear the influences in forms of subtle choir nods (such as that marvelous intro to the first track) or the overwhelming sense of despair and loss that seems to reign supreme throughout this whole EP.
One thing I love is the production, because although this shares a lot of common similarities with the trademark ‘Black Metal’ aspects and essence they’ve found a way to place their own spin on things and mark themselves apart from the respect with their ever so ‘devastating’ yet ‘hypnotic’ use of the instrumentation and the sonic aesthics like.
The best way I can describe something like this is walking through an ancient ruins at midnight all alone with nothing to accompany you but fear itself and mystery (and sometimes that partnership is enough to activate some powerful things).
The vocal performances on this thing are wild! truly ghastly and monstrous all at the same time with some vicious use of death growls and screams that would leave Danny Trejo up at night, it’s absolutely insane. Also I have to give a huge shout out to the guitars and drums because the way they sync and perform these long drawn out chords and pattern to further stamp the ‘horror’ into the record is nothing short of outstanding.
Overall if you’re a vivid ‘Black Metal’ fan or just ‘metal’ fan in general this haunting experience is one for you! It may be short but what it lacks in length it more than makes up for in pure terror. –Corban Skipwith
Track list:
1. The Legacy Of The Untold
2. Nocturnal View Over Frozen Landscapes
3. Sleeping Under Tartarus
Posted by Dave Wolff at 12:29 AM