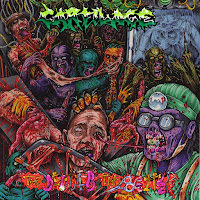 Band: Cartilage
Location: San Francisco, California
Country: USA
Genre: Death grind
Full Length: The Deader The Better
Format: Digital album, cassette, LP (Bone w/ Blood Red Splatter), LP (Mustard w/ Magenta Splatter), LP (Doublemint/Purple Swirl)
Label: Creator-Destructor Records
Release date: May 13, 2022
New review time (as exciting as always) and today we are talking about the 2022 release by Death Metal/Hardcore band ‘CARTILAGE’ featuring 11 new brutal tracks to head bang to!
Firstly, I want to say I love the aesthetic of this record because as heavy as it is, it still has that late 90’s/mid 2000’s ‘Death Metal’ feel to it which is easily my favourite era. Now I know if you look at the sub genres listed by the band themselves they list things like ‘Grindcore’ and ‘Gore’ but to be honest (and this isn’t a knock against them) but I just feel a stronger presence of ‘Death Metal’ more than anything else but done in the right way! I want you to imagine Cannibal Corpse’s prime albums or Death’s early discography that’s the vibe I’m going for on this record.
You can hear those sludge like yet groovy instrumentation with those heavy handed guitar strings and the marvelous drum work, the technically and the rhythms and patterns are so on point and flawless that it helps each track shine as its own independent ‘monster’ to embrace.
The vocal performances are top notch as well! I love the combination of high pitched notes and death growls, that’s what I like to see in ‘Death Metal!’ Early Corpse did the same and those were arguably their best work, but regardless this guy does a fantastic job at switching between the two styles and combined with that relentless production and instrumentation it just makes for a killer project.
Conclusion? This is probably my favourite ‘Death Metal’ project thus far this year, it done everything right in my eyes, it’s got that infamous ‘meat and potato’s’ style that I love from ‘Death Metal’ but also mixed it with some great technique, production and performances by everyone across the board! Definitely going on my list for album of the year contender! Go check it out yourself! –Corban Skipwith
Lineup:
Mark Wallace: Vocals
Teresa Wallace: Guitars
Mike Flory: Guitars
Kienan Hamilton: Bass
Adam Houmam: Drums
Track list:
1. Intro
2. Slaughter Day at the Chopping Mall
3. The Deader the Better
4. I Skin You
5. Mallet Wielding Maniac
6. Gurgitor
7. Cellar Full of Stiffs
8. Axe Scratcher
9. Gashes to Ashes
10. The Casket Crawler Catastrophe
11. Boneyard
Posted by Dave Wolff at 1:37 AM