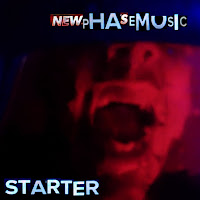 Project: Newphasemusic
Location: Portland, Oregon
Country: USA
Genre: Neo psychedelic darkwave/dreampop
Single: Starter
Format: Digital
Label: Independent
Release date: May 5, 2022
Portland, Oregon’s Newphasemusic is described as a drums-driven visceral industrial project by founding member Daniel Henderson, who currently works for several projects including the neo psychedelic darkwave/dreampop project Trance To The Sun. I recently received an email from Henderson asking if I could listen to and write about his latest Newphasemusic single, and something made me curious as to what I'd experience if I agreed. I ended up in an industrial world I wouldn't forget for a while after following my intuition.
I checked out some material by Trance To The Sun while writing this review in order to gain a better understanding of Henderson's musical outlook. As a starter, I chose the EP "Lost Garden Gnome Hotline" and felt drawn to its atmosphere, organic musicianship and haunting vocals. This marked a striking contrast to the myriad of severe, glacial electronic effects on Newphasemusic's three versions of "Starter", and demonstrated Henderson's multifaceted tastes and ability to channel them.
While he plays drums for that band, Henderson runs Newphasemusic as a solo project, in addition to designing the cover art, doing all of the mastering and producing the promotional video released with it. Although he’s based in Oregon, his work is testimony that something inventive and original can transcend state lines and beyond as his projects voice the mystery and strapping expressiveness of underground Manhattan culture (which remains alive and well despite years of upper class gentrification). I thought of the local bands I heard from the 90s to the present and realize obscurity doesn’t denote a band’s potential to change the face of music.
Like Trance To The Sun, Newphasemusic is based in a well-defined subgenre but the growth factor should go a ways toward laying the notion to rest that remaining in touch with where you started is not tantamount to limiting oneself. Not if you have the imagination and the resources to explore every aspect of said subgenre. I saw this in underground metal and gothic music, and this is reinforced with a vengeance on the “Starter” single.
I mentioned three different versions of the song were recorded for this single, and each one is so radically different you might suspect they were different compositions altogether. “Starter” is based on an incident that took place in Charlottesville, Virginia in the summer of 2017; for more information about this you’ll have to refer to the link provided. Musically it was almost required to come across and stark and harsh so it could accurately convey the author’s impressions about said incident years after it actually happened.
“The faces that you know/The faces that you don't know/Broken pieces and scattered teeth/Could it be you're not the one that's weak?” With media spin and misdirecting scandals involving Sharon Osbourne, Marilyn Manson, Chris Rock and Johnny Depp it doesn’t seem as if we’re getting any closer to alleviating real intolerance and suffering, but we’re only moving more slowly toward doing so, according to Henderson when he wrote it. For all the darkness it displays musically, “Starters” offers a hint or two of optimism.
From cold and robotic to a menacing mix of industrial, metal, jazz and blues (!) to somewhat reminiscent of Devo and old Prince (!), the three mixes of“Starter” are an exercise of ignoring boundaries without completely changing to reach mainstream popularity. And a promising preview of Newphasemusic’s debut full length “The Dark Side of the Earth” which will be released this year. –Dave Wolff
Lineup:
Daniel Henderson: Vocals, all instruments, programming, treatments, engineering, production, mixing, cover artwork, video production
Dorian Henderson: Geodome
The Joy Thieves and SINE: Remixes
Colin C.: Mastering
Track list:
1. Starter (Geodome Mix)
2. Starter (The Joy Thieves Remix): Remixed by Dan Milligan
3. Starter (SINE Remix); Remixed by Rona Rougeheart
Posted by Dave Wolff at 1:32 PM