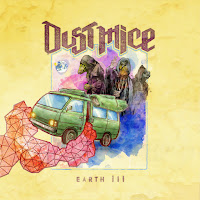 Band: Dust Mice
Location: Seattle, Washington
Country: USA
Genre: Spacey atmospheric garage rock
Full Length: Earth III
Format: Digital
Label: WormHoleDeath Records
Release date: April 16, 2021
You know, every now and then you need that funky, groovy album to help break the cycle of nonstop ‘heavy’ albums that I get asked to review. Don’t get me wrong I love reviewing those heavier projects as I do love that style of music but again it’s not too often I get such a laidback record like this in my lap so I’m going to enjoy myself with it!
This is the 2021 release by the band who are showcasing eight new tracks for the world of rock in all its forms to enjoy! I love everything about this album and I can honestly say that because of just how ‘fun’ of a record it is, most of the time I’ll be describing a record as ‘brutal’ or ‘dark’ but here it’s just some good old fashion ‘fun’ and that alone made me excited to talk about it!
As far as the instrumentation side of things goes there’s plenty of stylistic choices such as
-Rock
-Garage Rock
-Psychedelic Rock
-Prog Rock
-Post Punk and more!
When I first listened to this album the one thought that entered my head was ‘Led Zeppelin on Acid’ but then I thought that makes no sense (because chances are they were on that and more already haha) I guess it sounds like a more trippy, stoner version of Zeppelin with that subtle ‘Punk’ flare attached, either way what I’m trying to say is it sounds dope as fuck and it just makes you want to smoke some weed and fly to a whole new sonic universe with this album, it’s so colorful and bright and engaging and powerful I mean it’s literally a work of art cramped into 8 solid tracks.
Every band member does a fantastic job in creating this ‘sci-fi’ spacy world, they all pull their weight and it shows. There’s never a boring moment to be found on this album, every track has it’s own definition of ‘fun’ and ‘exciting’ its own special use of creativity and ambience, technicality and charm sown into every fiber of this thing, seriously just unreal.
Please, do yourself a favor (High or otherwise) but preferably high go check out this unique specimen of an album and see what all the fuss is about! –Corban Skipwith
Lineup:
Patrick Seick: Lead vocals, synth, percussion
Robbie Houston: guitar, acoustic guitar, backup vocals
Nate Henry: Saxophone, backing vocals
Lewis Hunt: Bass, acoustic guitar, backing vocals
Zane Graham: Drums, backup vocals
Track list:
1. Choom Wagon
2. Eye Make You Eye
3. Hepatitis X
4. Solitude
5. Sky King
6. Crisis on Infinite Earths
7. Desert Bus
8. Mountain Wizards
Posted by Dave Wolff at 7:17 PM