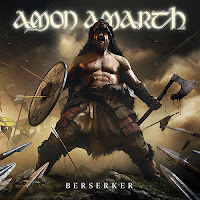 Band: Amon Amarth
Country: Sweden
Genre: Melodic death metal
Full Length: Berserker
Format: Digital, CD
Label: Metal Blade Records
Release date: May 3, 2019
Reviewing Marduk has increased my urge to look up bands I admired in the 1990s but lost touch with. Named after the Mordor volcano where Sauron forged the Ring in Tolkien's “Lord of the Rings” saga, Amon Amarth, released their debut full length “Once Sent from the Golden Hall” in 1998. Homaging Scandinavian culture and mythology for the next two decades they forged a place in history as one of melodic death metal’s premier bands with Hypocrisy, Unleashed and At The Gates.
“Berserker” suggests their search for new musical and lyrical ground is far from slowing despite the mixed reactions their recent albums have garnered from fans. Whether Amon Amarth’s basic adherence to formula is a positive or negative depends on your preferred subgenres of metal, and how much growth you generally expect from a band. But to write them off as being stagnant would sell them short as their evolution and growth has been a longer, more meticulous process.
The cover artwork of “Berserker”, designed by Brent Elliott White, gives the impression of where the band’s evolution has come this far. It’s somewhat similar to the artwork adorning Manowar’s “Louder Than Hell”, another band who swam against the tide of popularity and forged their own path. Braving arrows, spears and swords, a lone figure stands under a darkening sky, apparently issuing a challenge to all enemies within earshot that he’s prepared to continue the long battle.
“Berserker” sounds more polished than I remember them on “The Avenger”, “The Crusher” and “Twilight of the Thunder God”, which may be appreciated by listeners who prefer melodic death-thrash with less distortion. The clarity this produces makes room for more innovation. The acoustic guitar passage introducing “Fafner’s Gold” and the manner in which the band elaborates on it makes this impression from the start. It reminded me somewhat of Metallica’s “Battery” and Bathory’s “Twilight of the Gods” when it comes to song structure and the feeling the song is intended to evoke. There also seems to be a greater amount of riffs written into the song, creating a different kind of epic feel to accompany lyrics based on the Norse legend of Fafnir.
The band on “Crack the Sky”, “Mjolner, Hammer of Thor”, “Raven’s Flight” and “The Berserker at Stamford Bridge” hasn’t gone soft in the heaviness department. As guitarists Olavi Mikkonen and Johan Söderberg incorporate greater melody and depth Johan Hegg’s vocal fry provides much diction, making the lyrics easier to understand without a lyric sheet and capturing the essence of Peter Tägtgren (Hypocrisy), Johnny Hedliund (Unleashed), Tomi Joutsen (Amorphis) and Lars-Göran Petrov (Entombed –R.I.P.). The strengthened backbone of bassist Ted Lundström and drummer Jocke Wallgren with the increased NWOBHM impressions are likewise subtle changes that make all the difference when it comes to the big picture.
The keyboard/piano passage introducing the album’s final song “Into The Dark” gives it an orchestral feel, and again mirrors the growth Metallica underwent from 1986-89. With its war metal theme and thought out guitar progressions, the song gives meaning to the idea that this part of Amon Amarth’s journey is coming to an end. You can almost see a port in the distance where they’ll be spending the night before setting sail the next morning for parts unknown. –Dave Wolff
Lineup:
Johan Hegg: Vocals, lyrics
Olavi Mikkonen: Guitar
Johan Söderberg: Guitar
Ted Lundström: Bass
Jocke Wallgren: Drums
Track list:
1. Fafner's Gold
2. Crack the Sky
3. Mjölner, Hammer of Thor
4. Shield Wall
5. Valkyria
6. Raven's Flight
7. Ironside
8. The Berserker at Stamford Bridge
9. When Once Again We Can Set Our Sails
10. Skoll and Hati
11. Wings of Eagles
12. Into the Dark

This review can also be read at Relentless Reviews With Corbz. -DW
Posted by Dave Wolff at 4:23 PM