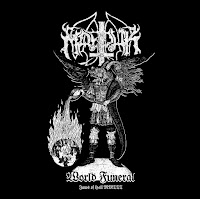 Band: Marduk
Country: Sweden
Genre: Black metal
Full Length: World Funeral: Jaws of Hell MMIII
Format: Digital, vinyl, CD
Label: Regain Records
Release date: October 30, 2020
When second wave black metal was on the rise, Marduk was a constant fixture on my playlist. Founded in 1990 as a death metal band, they became one of Sweden’s premier black metal bands with Dark Funeral, The Black, The Abyss and Watain. Named after a god of Mesopotamian mythology, Marduk chose their name as a means of sacrilegious reproach and sardonicism against the light this deity represented, taking thrash and death metal’s blasphemous nature to the next level.
I lost touch with them in the 2000s but recently started catching up. Searching for new releases I discovered “World Funeral: Jaws of Hell MMIII” which was recorded during their performance at the Party San Festival in Germany back in 2003. Finding this album out of nowhere was like running into an old friend I haven’t seen in years, filling each other in on what we’ve been up to all this time. It wasn’t even necessary to get loaded in the process, haha, but new memories can still be made.
As live recordings go, the production on “World Funeral: Jaws of Hell MMIII” is decent enough, having been recorded from the soundboard. In many ways this recording method works for the material, which spans 1992’s “Dark Endless” to 2003’s “World Funeral”. Generally you can hear every instrument but the bass tends to be absent occasionally. Regardless, the unadulterated fury Marduk brings to the stage is captured quite well, as is the audience’s rabid appreciation.
Vocalist Legion, guitarist Morgan, bassist B. War and drummer Emil Dragutinović charge through their set, giving you little chance for a breather in between songs and demonstrating why the stage in their career in which Legion was lead vocalist was so pivotal to their evolution as a band. The rawness here is like listening to a show you attended and taped for yourself and for posterity. The older songs like “Wolves,” “On Darkened Wings,” “Materialized in Stone” and “The Black” have the most sentimental value for me, but more recent tracks like “Hearse,” “Azrael,” “World Funeral” and “With Satan and Victorious Weapons” show how fast, tight, dexterous and brutal the band became in later years. –Dave Wolff
Lineup:
Legion: Vocals
Morgan: Guitars
B. War: Bass Emil
Dragutinović: Drums
Track list:
1. Jesus Christ... Sodomized
2. Hearse
3. Slay the Nazarene
4. Wolves
5. Azrael
6. On Darkened Wings
7. World Funeral
8. Obedience
9. Bleached Bones
10. Baptism by Fire
11. Materialized in Stone
12. Christraping Black Metal
13. The Black
14. With Satan and Victorious Weapons
15. Still Fucking Dead
16. Fistfucking God's Planet
This review can also be read at Relentless Reviews With Corbz. -DW
Posted by Dave Wolff at 12:18 PM