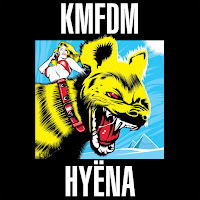 Band: KMFDM
Country: Germany
Genre: Industrial, electronica
Full Length: HYËNA
Format: Digital, CD, limited edition vinyl
Label: Metropolis Records
Release date: September 9, 2022
Thirty eight years and twenty-two studio albums since their inception and KMFDM still persists in mocking the system in as broad a spectrum as possible. The American political zeitgeist has been mired in spin and confusion, the subject of criticism and conspiracy theory, for years. And with the recent Trump presidency, world affairs seem to be heading further in that direction. Rather than getting caught up in it all, KMFDM make sport of what the media says to believe or disbelieve in to determine public opinion.
Sometimes it’s cathartic to derisively caricature media and politics, and it works to point out how disastrous an effect it’s been having. The Sex Pistols did so with “Anarchy in the U.K.” not to proselytize it but to tell people anarchy was already happening because of the political zeitgeist of the time. No matter how misunderstood their statement was, it is still timely now considering everything that’s happened since 2000. KMFDM remind you of this in a similar statement that reflects the current state of our society.
KMFDM’s new full length “HYËNA” has something for fans of rock, punk, thrash, industrial, techno, electro, country, hip hop, reggae, ska and many more genres. Eclectic to the point of extreme schizophrenia, it will have you constantly guessing what is to come next and how intense it will be when unleashed. All with the edgy attitude, forceful political slant and lyrical assaults on corporate interests of all kinds they’ve retained since Sascha Konietzko formed KMFDM as a performance art project in the early 80s.
Art imitates life in many ways. Or does life imitate art? I’m still somewhat uncertain. The contradictions and doubletalk news programs try instilling into the minds of the public is reflected in popular entertainment, as formulaic pop songs written by the same producers are thrust into your consciousness with the same insistence that you accept it at face value. As attention spans grow shorter sometimes even classic rock bands are forgotten. As such the need for bands like KMFDM who unite different genres within their own musical motif is greater than ever. Thirty years ago I sensed something special brewing here, and it hasn’t gone away.
Their energy and conviction seems to have been reinforced by mainstream banality. This is apparent from the first track “All 4 1” which is a manic hybrid of Ministry, Nine Inch Nails and Voivod with hyperdriven intensity. In the rock/funk/rap of “Rock and Roll Monster”, the Motley Crue/Cult/Devo crossover of “Black Hole”, the early 80s new wave/90s techno-industrial of Hyëna and the reggae of “Déjà Vu” with sampling and yodeling, the extreme deviation in themes is propelled forward with enough speed and contrast to make your head spin. And this is but a handful of the songs to experience. Even stranger themes are yet to be revealed.
The crossing over of genres is so implausible to conceptualize you’ll be awed by how convincingly KMFDM make things work. It’s as multifaceted as the media is contradictory. The lyrics of the songs mentioned above and of “Blindface”, “Deluded Desperate Dangerous & Dumb”, “Immortally Yours” and “Liquor Fish & Cigarettes” are clear cut in their criticisms, urging you to think rather than walk around with the wool pulled firmly over your eyes. The world may be inundated with bullshit, but KMFDM can flush it away. –Dave Wolff
Lineup:
Sascha Konietzko: Vocals, guitars, bass, keyboards, synthesizer, programming, drums, percussion
Lucia Cifarelli: Vocals, keyboards
Andee Blacksugar: Guitars
Andy Selway: Drums
Track list:
1. All 4 1
2. Rock 'N' Roll Monster
3. Black Hole
4. Hyëna
5. All Wrong - But Alright
6. Blindface
7. Déjà Vu
8. Deluded Desperate Dangerous & Dumb
9. Immortally Yours
10. Liquor Fish & Cigarettes
11. In Dub We Trust
Posted by Dave Wolff at 9:03 PM