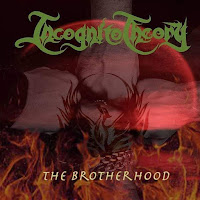 Band: Incognito Theory
Location: Kearny, New Jersey
Country: USA
Genre: Southern metal
Full Length: The Brotherhood
Format: Digital album
Label: Ragebreed Records
Release date: September 2, 2022
“Gravesland” an advance track from “The Brotherhood” was released by Incognito Theory in May and reviewed by Corban Skipwith the following month. This is the first time I have heard anything else from the band in a couple months; I remember advance downloads were available, but I preferred waiting for its official release. In essence, it is turning out to be a pleasant surprise.
"Gravesland" is one of four advance tracks released to promote the band's new album, released this week. Other songs include "Sunset Moonshine", "Fired Up" which was released as an official video, and "Whiskey Fueled" which was released nearly two years ago. The southern rock and southern metal industries have long anticipated "The Brotherhood" due to this activity and Ragebreed Records' promotion. I can attest that it was worth the wait now that it's here.
Pantera have always been a favorite ever since I first heard "Vulgar Display of Power" (I won't discuss the mixed opinions regarding their reunion tour), but if you consider that album heavy you should check out "The Brotherhood". There is no other Southern metal I’ve ever listened to that is heavier, more massively produced, and more intense. Occasionally, I described bands as so heavy that I thought my chest would collapse. There is no doubt this elucidation applies here; if you appreciate this genre, judge for yourself.
As a result of being stripped down to just the right amount, "The Brotherhood" is mixed like a sledgehammer blow to your gut. The track is melodic and groove-laden without compromising the weight and density it brings. One's youth motivation to be successful performer is reflected in the delicate balance between rhythm and crunch, living on the edge of excess, just short of going over. Ironic that the band is from New Jersey and does southern metal so well. You wouldn’t be able to tell the difference.
After years of drumming for The Undead and Samhain and playing bass for Danzig, Steve Zing has developed aptitude for executive producing albums. As it appears here the musicianship has every bit of potential for aboveground consumption, and no need to try to copy bands from other eras of rock. It is the balanced distortion and clarity in the songs, especially on the guitars, that convey a sense of unmitigated honesty that will convince you it’s sincere. It may not be “versatile” but it champions passion over image.
This is not to say that other elements aren't introduced into the band's formula. Some of the riffs hint at shades of funk, thrash metal, grunge, and traditional rock. These aren't shoe-horned into the tracks nor are they added for the sake of elitism. As the band writes what they feel, those characteristics seem natural next to their southern flavored progressions.
Among the heaviest tracks on this album are "Set It Off", which has a Sly and the Family Stone-like refrain, and "Blow It Up", which is partially influenced by AC/DC and Circus Of Power. "Whiskey Fueled" contains Metallica-inspired riffing, a chorus reminiscent of Stone Temple Pilots, a bass break reminiscent of Red Hot Chili Peppers, and blazing guitar solos. The riff on "Draw the Line" reminds us of early Van Halen; "The Cleansing" reminds us of Tony Iommi, and even Lars Johansson and Mappe Björkman from Candlemass.
Additionally, the album captures the energy the band generates onstage and presents it to the listener. They are able to project that energy with a great deal of help from John Mosco who handled production for "The Brotherhood," as if it had been recorded entirely live. So what’s keeping you? Come to the show, meet old and new friends, let the whiskey flow, let your ears bleed, live a sinful life and also watch for a guest appearance by Mike LePond (Silent Assassins, Ross the Boss, Symphony X, Them). –Dave Wolff
Lineup:
Dave Incognito: Vocals
Steve Bloodgood: Guitars
Jay Brachman: Bass
John Mosco: Drums
Track list:
1. Set It Off
2. Hell Bent
3. Smokin' Gun
4. Fired Up
5. Whiskey Fueled
6. Draw The Line
7. Blow It Up
8. Sunset Moonshine
9. Gravesland
10. Band Of Brothers
11. The Cleansing