CD Review: DEGENERHATE Chronicles Of The Apocalypse by Dave Wolff 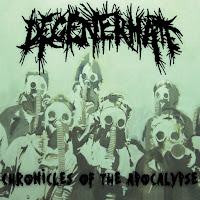 DEGENERHATE
Chronicles Of The Apocalypse
Sliptrick Records (2015)
First released independently in 2013, Degenerhate’s Chronicles Of The Apocalypse was picked up by Sliptrick (Sweden) for a 2015 release. The Italian band’s founder Gianluca Lucarini has been a fan of death metal and grindcore and working musician since 1989 (this information I acquired researching the band in Extreminal Webzine: extreminal.com). Following several years away from the local scene due to the “rock star” attitudes he observed, he formed Degenerhate in 2002; This is their first full length CD after the band was together on and off for a decade and underwent some lineup changes. Lucarini stated Degenerhate is not your typical grindcore band as they incorporate sludge and melody (along with “other stuff” as he pointed out to Extreminal) into their material. At first listen they sound like typical grindcore with your samples and your similarities to Terrorizer, Benediction and Exit 13, though the unnamed introduction presents the initial impression this band is different. Bushit, directly following the introduction, demonstrates how spot on they are as a unit, and the amount of emphasis they place on blast beats. There were a few moments where the guitars started to remind me of Mayhem on De Mysteriis Dom Sathanas. This combination of influences grew on me the more I listened and I could feel the raw aggression the songs were composed with. A few of them I checked out more than once, such as Earth First. War Inside My Head, Power, Cannibal Ritual and Fur Is Dead. Lyrically I don’t know what they’re saying about the world as a whole, but I’d guess some of their subject matter is environmental issues and animal rights. On slower songs like Another You, Another Me the band show the most deviation from usual grindcore fare. Just about all of the tracks are under two minutes which helps the band get their musical point across simply and directly. -Dave Wolff