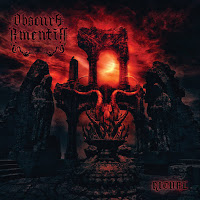 OBSCURA AMENTIA
Ritual
Independent
This female-fronted band from Italy formed in 2005 and released this full length in 2012. Ritual is the band’s follow up to their debut full length The Darkest Dream, which came out in 2010. Since 2012 there hasn’t been anything new from them, and I gather from their Facebook profile there are no performances scheduled for the immediate future. Al the same, Ritual is available from Amazon, CD Baby and the independent label Naturmacht Productions. Their material is likewise available for streaming on Bandcamp and Youtube. So the band has channeled a great deal of effort into promoting their work. Female vocalists in metal has always been a topic of discussion whether the band in question is mainstream or underground. It has long been debated whether a female vocalist is as capable as a male. Personally I’ve heard more than enough singers to lead me to conclude that gender is irrelevant, and Hel is capable of complementing Obscura Amentia on her merit. She somewhat reminded me of another Italian vocalist and AEA interview by the name of Evil Lucifera and other female black metal vocalists of her ilk. These vocals are likened to the feral rage and pride of Lilith, who refused to become subservient to Adam and instead of being cast out of paradise on earth departed of her own free will. I get the same impressions from Ritual, along with impressions of Lilith’s journey into the unknown and consultations with demons. As there is notable influence from Norwegian black metal, the songs and particularly the guitars (all recorded by second member Black Charn) are a dark carnival of forbidden knowledge and forbidden pleasures. Lyrically the band leans closer to morbid subject matter, dealing with mortality, nothingness and profound sorrow. A different kind of hell, without the fire and brimstone. But one every bit as all-encompassing in its pure horror. Personal favorites include the epic track Lost In The Reflection Of Moon with its myriad of dark moods. -Dave Wolff