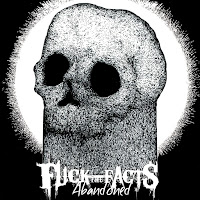 FUCK THE FACTS
Abandoned
Independent
I still remember reviewing this Canadian death/grind band on a fairly regular basis while writing my extreme music column for Good Times. Back then I was receiving their promos on cassette, and I still might have the copies in my tape collection. Now they are part of the digital age and you can stream them on the net. Abandoned was released in 2014 on a limited edition basis (100 copies) and is sold out, though you can hear it on Bandcamp. The production has improved since their cassette days; guitarist Topon Das mixed and mastered the material himself at a place called Apartment 2 which could be his own studio. I’d have to ask him. The production and delivery of the tunes I listened to; Endless Emptiness, Disabused and L’impasse; are beyond brutal and miles ahead of what the band was doing in the late 90s. Das in particular has really honed his originality as a musician and his approach to songwriting goes a long way toward making F.T.F. a unique band in the field of death/grind. His lengthy experience in the band results in professional, near-flawless quality, the kind you’d expect from Nuclear Blast or Candlelight. This also demonstrates that bands have come a long way when it comes to producing their own material, thanks largely to social media. The band’s next recording Desire Will Rot should be out in August. -Dave Wolff