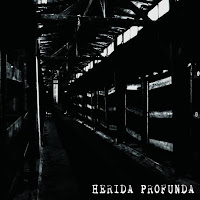 HERIDA PROFUNDA
s/t LP 2013
Prowler Records/Distro (USA)
Disturbing and tormented. The Intro stressed me like none else; it sounded like hurt pets. Violent at the end. Musically, everything sticks in one single entity. The voices are tortured, full of rage hiding a sort of sadness, enough to make you feel bad and revolted. I prefer the one called "Paraliz" actually; it’s a bit "punky". The song "Dlaczego" reminded me of a French band named "Gronibard" (if I translate from French to English it means "big boobs") especially because of the vocals. Anyway, it sounds like the band really enjoys what they do. Guys, you made me feel uncomfortable during the intro, but the whole album kicks Satan's ass .I enjoyed the bass notes because it is played quite like in the band "Misanthrope" (France). All the elements stick together. Well done. -Abyss Forgottentomb