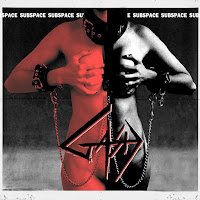 GASH
Subspace
Independent
http://www.facebook.com/GASHOFFICIAL
It’s uncanny how GASH seemed to arrive at the right time to assure me not only is punk not dead but still perfectly capable of posing a tangible threat to the status quo after all is said and done. Having formed in recent years, this is a fresh outlook on the time-tested genre. Like local NY punks Deviant Behavior in the 90s and Vulgaras in the 2000s, the Philadelphia band goes all out to promote sexuality as rebellion against vanilla sex repression and exploitation by mass marketing, with no effort whatsoever to sugarcoat their message or render it safe for consumption. Going to see them perform is a celebration of fetishism you’re experiencing up close and personal, as opposed to watching it from the outside, through your television screen. I haven’t even seen their live performances yet and after interviewing frontwoman Tibbie-X Kamikaze, watching their live clips and listening to their debut EP I already recommend support of this band and what they stand for. Since Phil Donahue and some magazines from his time exposed the underbelly of society that is the punk/hardcore lifestyle for the first time, middle America has had only a taste of it. Bringing it into middle class homes was only the beginning as people became curious to learn more. Despite the ‘all skinheads are nazis’ yellow journalism of Geraldo and Oprah and Hollywood sensationalism, exposure of the punk underground has exploded and proven to have a lasting effect on people who claim it offends them despise it yet can’t seem to stop talking about it. If bad publicity is good publicity, the media has done its job well in uplifting its status into the collective consciousness. Still, GASH could care less either way and have no concern to please the masses, choosing instead to keep building the revolution from the ground up. Musically as well as aesthetically they make an impact as the original songs composed for this EP show. Ritual, Deadly Venom V, Astral D.S, Luxuria, and the live performance of New Way all resonate with the atmosphere of actually going to CBGB, not seeing the movie. This band is a by-the-fans-for-the-fans affair and it’s a relief to see that some people still care about breathing new life into the idea. -Dave Wolff