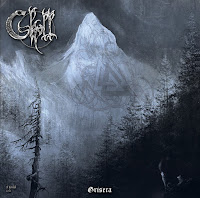 SKOLL
Grisera
Ewiges Eis
http://www.facebook.com/eerec
At first I thought this was a sort of depressive death metal. I tried to translate the "non English" titles but did not find out. With the title "Grisera" (in Swedish 'gris' means 'pig', but I don't think that the title is related to it since I have never seen this word). It sounds quite medieval, but the title "Wolves In The Mist" is certainly a little influenced by the first European tales. This band is also unique in their own way of playing. I don't know if some of you recognized the "symbol" on the drawn mountain on the CD cover, Valknut. Wikipedia says "Hrungnir had a heart that was famous. It was made of hard stone with three sharp-pointed corners just like the carved symbol hrungnishjarta [Hrungnir's heart]. Comparisons have been made between this symbol and the symbol known as the valknut. Hrungnir is a strong giant from Jotunheimr (where the giants live). The prose Edda was written by a Christian named Snorri. I guess this band is a group of warriors like the native Nordic-European children. -Abyss Forgottentomb
Posted by Dave Wolff at 8:46 PM