Interview with Reggae of REIGN OF TERROR by Dave Wolff 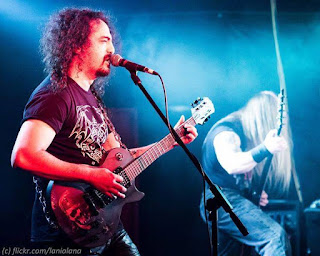 What accounts for the extended period of time between the releases of Under Blackened Skies and Book Of The Dead? Was the band on a hiatus during those years?
Mostly I’ll put it down to lineup hassles. We'd write a bunch of songs and someone would leave and then we'd get new folk in and it happened a few times, so just getting a bunch of people to write/create songs together for long enough to get tight enough to record an album. But I've always got a heap of songs that never got recorded or played live so if we ever get a multi-album deal I'll still not run out of songs!
How many unrecorded and unreleased songs has the band accumulated through all those lineup changes? Are the new members of the band learning the older songs?
Yeah we have heaps. One day if someone ever gives me a multi-album deal I'll be able to record them all again and release! I've probably got at least two albums worth of unreleased material, but probably another two albums of songs I've written, so we won't be running short of material any time soon! What usually happens if we have a lineup change we'll make the new guy(s) learn a few songs whatever they want to learn from the old material. There are a couple of classics we just have to play and then we'll do new stuff. It keeps it moving forward and keeps it interesting for me and Kris who have spent 13 and 22 years each in the band.
How many songs were included on Tormentor Of Lost Souls? In what ways do they expand upon the band’s style?
We recorded seven new originals, six older songs and our version of "In League With Satan" by Venom. We are undecided if we'll rerelease the six older songs (as they've already been released). I dunno if it really does expand that much on the style of playing. There's a few cool things in there that we didn't try before but in my opinion we've always had a varied style as far as 'death metal' goes. But we're definitely getting better at it, which is what counts in my opinion and that’s really all I’m after anyway.
Describe the new songs on Tormentor Of Lost Souls and the subject matter written for them? Why did you choose to cover In League With Satan for the new release?
Most of the subject matter focuses in on the one thing we can't escape and that's Death: be it Armageddon, the return of the great lord Cthulhu, Egyptian curses, Flesh Eating Parasites, The Antichrist and so forth.... In short we tried to keep this one on the more positive/uplifting side of life hahah! Why Venom? Why not? They invented extreme metal in my opinion and influenced me no end... it was one of the greatest moment in my life when Jeff Mantas heard it and said 'Maximum Respect!" as he always does hahah! But in all seriousness the sound/ideology and playing style fits in well with ours.
What twists are put onto those death-related themes that are unique to the band? Who wrote the lyrics to these songs and how much research went into the lyrics?
Not a lot of effort goes into the lyrics. Most of them are dream related, especially the more 'occult' songs. I just wake up and write down the meat and bones of the song. If I dream up something worth singing about and then the next day just go through it and make sure it fits my way of singing (pronunciation, vocal phrasing etc). I like to make the songs rhyme but usually they do anyway. Generally speaking they seem to come to me so I don't have to force them. Most of them are influenced by things like Revelations (from the Holy Bible) and my favourite the Necronomicon and the works of HP Lovecraft (which I view to be two different things.... but that’s just me) and the odd one influenced by a film or something (like Human Centipede). Strange thing is not a lot of research went into the lyrics either, maybe a subconscious absorbing of the occult maybe? Either way they just seem to fit in with occult parameters naturally. I dunno really where they come from but they just do!
How soon do you expect to work on another full length? Any cover ideas you have in mind for the next recording?
No idea really, we'll just take it as it comes. It will come when it does. We've been here for 20 plus years and we ain’t going anywhere anytime soon. I don't worry about it in terms of linear time. I have already painted the cover for "Tormentor Of Lost Souls". It follows the Book Of The Dead style of artwork and I’m really happy with it. It’s an oil on canvas. Again most of the inspiration follows from the dreams that inspire the lyrics, so it seems to fit!
Reign Of Terror
-Dave Wolff
Posted by Dave Wolff at 12:52 PM