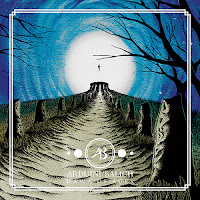 ARDUINI/BALICH
The Wraith
From the band’s full length Dawn Of Ages, released February 24, 2017 on Cruz Del Sur Music
Concept and making by Yod Multimedia
Cruz Del Sur Music Facebook
Cruz Del Sur Music Bandcamp
Cruz Del Sur Music Twitter
It appears the time has come for things to become even colder and bleaker with this unlikely collaboration of musicians. Arduini/Balich is the brainchild of members and former members of Fates Warning and Argus: Victor Arduini and Butch Balich respectively. Arduini was a guitarist for F.W. from 1984-85 and has since been involved in Entierro, Freedoms Reign, Misfit and Eleventh Hour Balich has been Argus’ vocalist since 2006 and has also worked with Molasses Barge, Child of Fire, Hexenhammer and Penance. Often I have commented about new bands benefiting from members with years of experiences playing in bands. From my first listen to The Wraith I can say Arduini/Balich is one of them. I’m not familiar with Argus’ work but I’ve liked F.W. since Awaken The Guardian. What got me interested in them were their similarities to Rush and their streamlined guitar sound. These made the band a unique talent for the time A.T.G. was out. Imagine a cross between them and My Dying Bride on Turn Loose The Swans and Like Gods Of The Sun, with vocals less somber and more indicative of longing. The Wraith is generally not as depressingly introspective as M.D.B. but definitely ethereal, atmospheric and darker than what we expect from Fates Warning. The lone guitar intro and accompanying lead guitar passage makes this point before the song is underway with a slow pace and streamlined guitars marrying the best qualities of those bands. The longer I listen, the more this shines through, with underground cred and varying themes to keep you guessing where the band will take things next. At over thirteen minutes there are many of these changing moods. There is a timeless something to the songwriting transcending the 80s and 90s, establishing a place in the nether realms that is eternal, foreboding and welcoming. The animations in this video give you visuals of this spiritual plane, a place where it’s still possible to heal despite years of loss and inner anguish. Something special is brewing from this band, and with more growth it should generate a concoction to quench your thirst for originality. -Dave Wolff