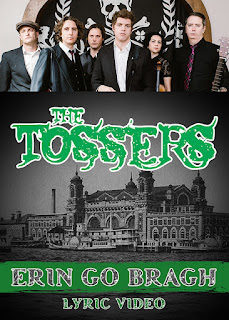 THE TOSSERS
Erin Go Bragh
From their current full length Smash The Windows (Victory Records)
Directed by Dustin Smith
Just in time for St. Patrick’s Day, The Tossers from Chicago release their new album Smash The Windows and a few videos to help promote it. If you like punk and Celtic music you should check out The Tossers since they’re a perfect fusion of the two. The band has been active since 1993, released fifteen full lengths and performed with Murphy’s Law, Sick Of It All, Mastodon, Dropkick Murphy’s and The Pogues among a host of others. Unlike most pop punk, their songs are less mainstream friendly and still resonate with a street vibe. Their Celtic themes generate a feeling of walking into a local Irish pub in which a band is playing and there’s drinking going on everywhere, and participating in the activity inside. This has given me a ray of hope that punk bands that play good music can still break aboveground without having to compromise. Listening to the rest of their material leaves impressions of how in touch with their heritage the band is; the video gives visual interpretations of the first Irish settlers to emigrate to America from the mid 19th century to the mid 20th when John F. Kennedy was elected president to the present. The history behind this track is as worthwhile as the video. Do a Youtube search for “Uncovering the Real Gangs of New York” for some unsung Irish-American history and you may find a few points you weren’t taught in high school. To track down some more history read about Peadar Kearney the Irish Republican and composer or rebel songs who wrote the Irish national anthem in 1907 and wrote several other traditional songs including The Tri-Coloured Ribbon, The Foggy Dew, and his own version of Erin go Bragh (year unknown). Victory Reccords’ Youtube profile features lyrics and there are links to a lyric video and a title cut video released for Smash The Windows. -Dave Wolff