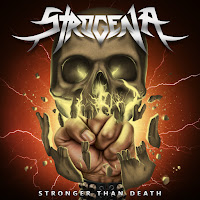 STROGENA
Stronger Than Death
Independent
Country of origin: Peru
Genre: Traditional heavy metal
Release date: August 5, 2017
I really like female fronted heavy metal. Women have a passion for singing which is an authentic demonstration of the genre’s essence. This is a very strong perspective, musically speaking. Coming from Lima, Perú, these women forged a traditional band influenced by the New Wave of British Heavy Metal. Everything is electrifying and straight to the point. Stronger Than Death is four songs composed with fast guitars, powerful vocals and great arrangements. Some songs are sung in Spanish. You can name a large list of references. Bassist/vocalist Maria Castro captures the spirit of heavy metal, and every line is solid and metallic. I liked “The Power Of Pain” as it has brilliant moments with solid guitar riffs (triplets ala Iron Maiden), sticky choruses composed to have fans raise their fists during live shows, and excellent dual guitars at the end. This band worked hard to compose their debut EP. Time shall tell; meanwhile support the underground and buy it directly from the band. Highly recommended!! -Victor Varas